Momentum is developing behind efforts for renewed attention to lingering problems related to the US nuclear weapons testing programme in the Marshall Islands. 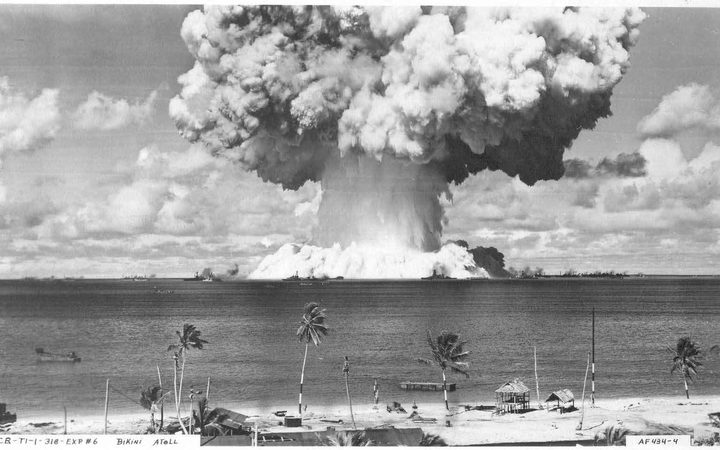 This week leaders of four nuclear test-affected atolls spoke of the building movement movement to issues surrounding the actions of the US from 1946 to 1958.

Elected leaders from Bikini and Enewetak, the ground zeroes for 67 nuclear weapons tests, and Rongelap and Utrok, two atolls heavily contaminated with radioactive fallout from the 1954 Bravo hydrogen bomb test, described separate meetings in the past few days with US Ambassador to the Marshall Islands, Roxanne Cabral, and Marshall Islands President, David Kabua, as "productive and positive."

The push for action on compensation, health care and cleanups of radioactive islands comes against the backdrop of negotiations between the Marshall Islands and US governments to extend expiring grant funding in a Compact of Free Association.

Island leaders said nuclear test legacy issues had languished for years and they wanted the Marshall Islands to pursue them during the upcoming talks.

It was preferred that a solution was found that benefitted both the Marshall Islands and the United States.

Parliament members and mayors of the four atolls said Wednesday they viewed the friendly dialogue with Cabral and President Kabua's commitment to pursuing the nuclear legacy in the upcoming Compact talks as important signs of progress.

Ambassador Cabral said she also appreciated the discussion with the four atoll leaders last week, the first time for her to meet the group.

He said the islands wanted the opportunity to seek resolution of the nuclear legacy through the Compact talks with the US administration and through the US Congress.

Yamamura said each of the four local government councils during the past two weeks had adopted resolutions calling for the outstanding aspects of the nuclear test legacy to be part of upcoming negotiations with the United States.

"We are solid on one goal: Justice," said Vice Speaker Peterson Jibas, who represented Bikini.

He said he was encouraged by the US Ambassador's engagement with the group and saw this as an important step in the process to gaining resolution of the nuclear test legacy.

The parliament members and mayors expressed their appreciation to the US government for its many contributions related to the nuclear legacy, while making it clear there were still outstanding issues.

They also said the Marshall Islands was an unwavering ally of America.

"We are here for the interests of the US," said Rongelap Mayor James Matayoshi.

"We hope they see us in the same light."

He urged discussions about the Nuclear Claims Tribunal awards to the four atolls and other legacy matters, observing this can lead to "benefit for both countries." 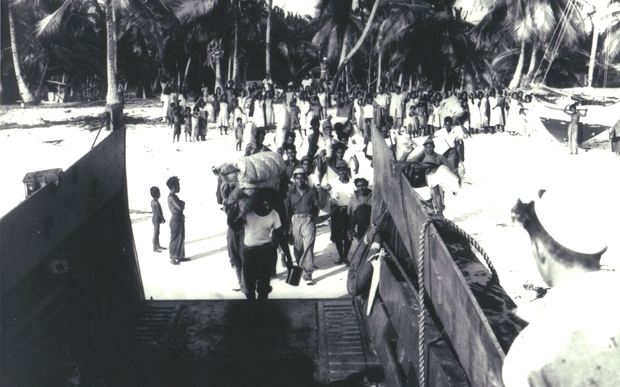 Bikinians in the Marshall Islands being evacuated from their home island after nuclear testing in the area by the US. Photo: US Navy

Before it ran out of funding to pay nuclear test compensation awards in the mid-2000s, a Nuclear Claims Tribunal in Majuro had awarded $US96.6 million to over 2,000 people for personal injury claims from the weapons tests but had compensation funding to pay only $US73.5 million.

In addition, the Tribunal awarded these four atolls $US2.2 billion in compensation for loss of past use, hardship while living in exile when they were moved by the US military to make way for the testing, and nuclear clean ups to make the atolls habitable.

But the Tribunal was able to pay less than $4 million on the $2.2 billion award for lack of compensation funding from the US government.

"I greatly appreciated the invitation from the leaders of the four atolls and the opportunity to listen to their concerns and understand the priorities they are focused on on behalf of their constituents," Cabral said Wednesday.

"The nuclear legacy is an important issue and a priority for both the United States and the Marshall Islands, and is among other important issues that our two governments work together on."

He said their suffering had been exacerbated by US authorities consistently downplaying the hazards of radiation and the potential for health problems among affected islanders.

Enewetak Mayor Jackson Ading praised the US for its support of various programmes at Enewetak, while commenting about a range of radioactive contamination problems at the former test site.

"We thank the US for what it has done so far," said Speaker Kenneth Kedi, who represented Rongelap.

"There is still a long way to go to address the justice issue."

Kedi said they were aiming to meet more regularly with the US ambassador on the issues.

"The Marshall Islands has always been a good friend of the US," he said.

"We shared sacrifices through generations to this day. We have a special relationship." 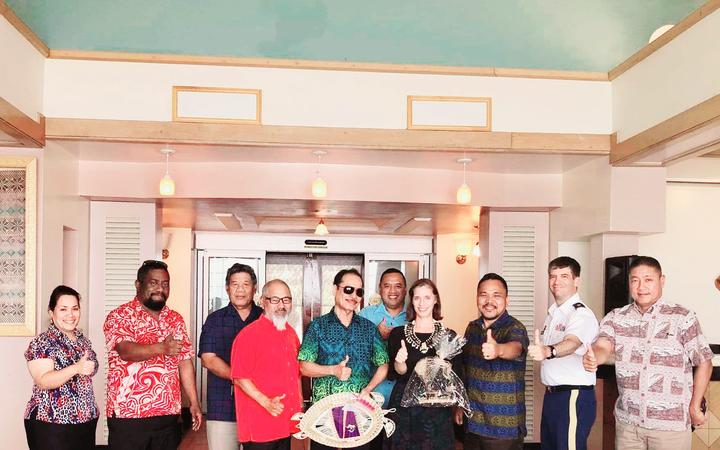 Nuclear test-affected atoll leaders, who met last week with US Ambassador Roxanne Cabral (fourth from right) and other US officials at the Marshall Islands Resort in Majuro,. Photo: provided

The Speaker said they assured the US ambassador the Marshall Islands was solidly with the US. But, he said, the nuclear legacy remained an obstacle to smooth relations for the entire nation.

"Our expectation," he added, "is the nuclear legacy will be addressed as part of the outcome (of the Compact talks)."

Yamamura said the initiatives of nuclear affected atolls aimed at establishing a friendly dialogue with the US government to address the changed circumstances that had become evident since the first Compact's nuclear test compensation package was approved in the early 1980s.

"I have confidence and I pray to God for good results in the future from this preparation," said the Vice Speaker.

The aim, Jibas added, was to resolve issues including compensation, cleanup of nuclear affected islands, and medical care for islanders.