Dozens of West Papuans have been named as treason suspects for attempts to raise the outlawed Morning Star flag. 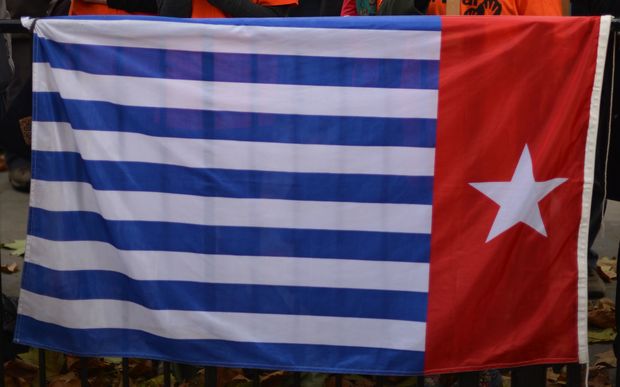 Indonesian police arrested over 34 people in Papua province for planned activities to mark 1 December, which some Papuans consider their national day.

Benar News reports a human rights lawyer, Yohanis Mambrasar, confirming that 20 people arrested in Sentani are expected to be charged with treason.

Dozens of other people were arrested in other Papuan towns and face possible treason charges.

Raising the Papuan nationalist flag is illegal in Indonesia, with police mobilising in extra numbers before the anniversary to prevent public rallies.

Tensions remain high in Papua following violent demonstrations earlier this year and escalating demands for a referendum on independence for the region.

Mr Mambrasar said the 20 suspects and 14 others who were questioned and released came to Jayapura from other parts of the province to attend a flag-raising.

Of these, six also will be charged with possessing weapons and one will face charges of incitement, said Victor Makbon, the police chief in Jayapura.

Meanwhile, seven people arrested in Manokwari, a coastal town in West Papua province, were being held for questioning after being picked up on Nov. 27, a local police official said.

A lawyer from the Legal Aid Research, Study and Development Institute, Yan Warinussi said police had named seven of the eight people detained in Manokwari as suspects.

Arrests also took place in Fakfak, on the southern coast of West Papua, including dozens who allegedly attempted to raise a flag at the official residence of the regent, the top local official.

Twenty of these people reportedly stated they were members of the West Papuan National Liberation Army.

The news outlet also reported that two leaders of the United Liberation Movement for West Papua were questioned by police in Jayapura.

They had reportedly made an appeal for people to commemorate the 1 December anniversary, the date Papuans declared independence from Dutch colonial rule in 1961.