New state of emergency orders have been declared in Samoa as it tries to contain the deadly measles epidemic. 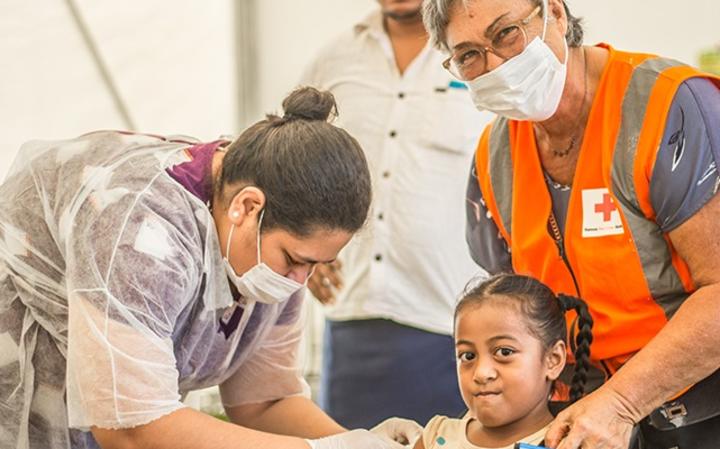 The outbreak of the virus has killed 60 people, most aged under four, since it began in October.

Yesterday, it announced all non-essential domestic travel on the roads would be banned on Thursday and Friday, as vaccination units cross the country.

People are being told to stay at home and wait for those units to arrive.

All private-sector businesses except hotels, accommodation services and the morgue will have to shut down.

The government had already announced that nearly all public services and offices would shut down on those two days so state resources could be focused on stopping the disease spreading further.

Just 13 percent of Samoa's population had both doses of the measles vaccine last year, according to the World Health Organisation and the UN children's agency UNICEF. The rates are starkly lower than its Pacific neighbours, most of which have vaccination coverage near 100 percent.

Unasa said the epidemic was preventable and there must be an inquiry into how immunisation rates fell so low in Samoa.

"Was it done knowingly? Why was there a lapse in delivering vaccinations?"

Unasa said Samoa's government had allowed a storm of misinformation to hurt public trust in vaccinations, including fears over the safety of measles' vaccines after the deaths of two babies who were given wrongly mixed doses of the vaccine.

She likened the measles epidemic to the 1918 influenza pandemic, in which the disease's arrival on board a New Zealand ship killed about 8500 people - a fifth of Samoa's population at the time.

"Did we learn from that? Well, how many years later, it's happening again."

Earlier this week Prime Minister Tuila'epa Sa'ilele Maleilegaoi said around 40,000 people had yet to be vaccinated.

Measles vaccinations have been made mandatory under local law and are now available for people aged 6 months to 60 years.

He is helping local health workers at a hospital designated as a measles facility.

"The staff are working really hard to see, assess and and manage acute patients with measles - a lot of whom are young children, and a lot of whom need admission or certainly observation for a period of time."

Dr Wright said they were seeing a mix of children who were unvaccinated and those who had been recently given the vaccine - but just at the time they were about to develop measles. "Not to say the vaccine's not working, just unfortunately for them it was a little bit late."

Many have complications such as respiratory infections, he said.

Dr Wright said some patients had been to traditional healers but had turned to the hospital when their child's condition had worsened.

"They've come to us to see if there's anything else we can do - and there usually is. We can usually admit them and rehydrate them and give them some powerful antibiotics for their respiratory infections."