Cartoonist not sorry for measles cartoon labelled as racist

The creator of a cartoon joking about the Samoa measles epidemic is defending it as a 'simple, innocuous joke' and says he won't be apologising "to the entirety of the Samoan nation". 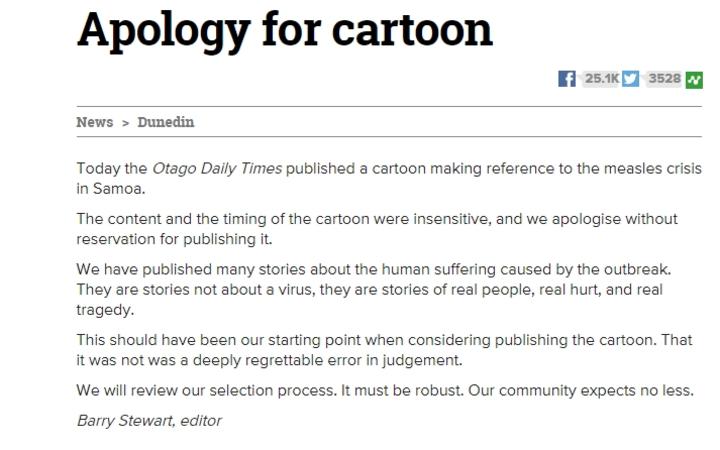 The newspaper apologised for publishing the cartoon which it said was a deeply regrettable error in judgement. "The content and the timing of the cartoon were insensitive," Otago Daily Times editor Barry Stewart wrote.

It shows two people walking out of a travel agent and one remarking that the least popular spots right now are the ones people are picking up in Samoa.

Garrick Tremain told First Up that while it was understandable people were upset, he won't publicly apologise to Samoa for "a simple, light-hearted joke."

"If you've read the cartoon, the basis is a travel agent taking the wrong end of the stick and making a stupid comment.

"I can quite understand why it has upset people. It's a very poor piece of timing for such a cartoon - I'm the first to agree with that.

He said had he realised the epidemic was going to be "all over the paper" and a main item on RNZ that day he would not have presented it.

"Had I known this was happening I don't think I would have done it, but it took me by surprise that it suddenly hit full face into the news this morning.

"I know it's not a happy situation at all."

But he defended the cartoon itself.

"Obviously, I would have thought that was self evident, if I had thought it wasn't advisable or satisfactory I wouldn't have done it.

"I can later regret having done it, but at the time that did not occur to me. I thought it was an innocuous joke.

It doesn't mention anything about death or children or things that everybody else seems to be so concerned about."

Though Mr Tremain ruled out a public apology to Samoa, he acknowledged on his website a "lack of judgement" and apologised to those offended. 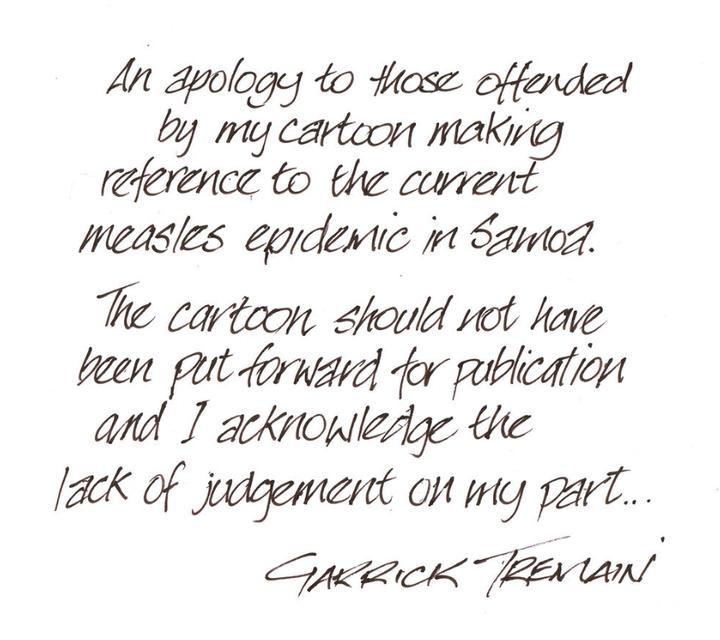 "I've had people ringing up and asking me for an apology and telling me I have no right to do cartoons or mention Samoa at the moment - so that rules out doing an apology because I could hardly do that without mentioning Samoa."

"In this politically correct atmosphere that we're being suffocated by you have to be aware that there is a growing number of people who wake up in the morning and their first intention is to find something to be offended about, so that's something that we didn't have to deal with in the past to the extent that we do now."

"It's not making light of the tragedy, in my opinion."