New Zealand's government is under pressure to limit harm from the highly-contagious measles virus, which is spreading into Pacific Island countries. 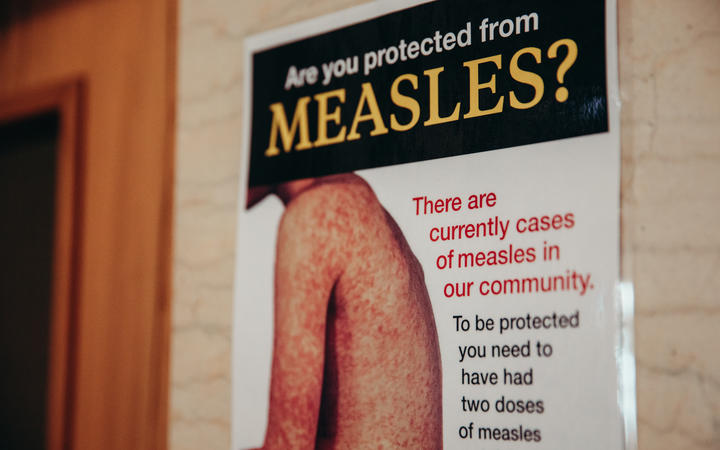 In Samoa, an outbreak was declared after a toddler died in Apia's hospital of a suspected measles infection.

Now the virus has reached Tonga too, with its government this week officially declaring a measles outbreak.

"Majority of the cases that we had initially were members of a national rugby team. Players who visited New Zealand from our schools...to play some games during the month of September. And then the first case contracted the disease while in New Zealand."

Tonga was fortunate to have previously achieved herd immunity to measles with over 95 percent vaccination rates - he's confident this will lessen the severity of measles for Tongans, Dr Ofanoa said.

But he urged the public to check their immunisation status and get jabs prior to travel.

Meanwhile, Samoa's government issued a release this week, saying the Ministry had been notified of 169 suspected cases of measles since September 2019, with 153 suspect cases in Upolu and 16 reported from Savaii. Of the 169 suspect cases, seven had been confirmed for measles as of last week.

"There are also 83 additional specimen results pending including the one suspected measles related death. Of the 169 suspected cases, 30 percent were admitted to Tupua Tamasese Meaole Hospital, most patients have recovered and been discharged home. But two adults and five children are still admitted in Apia's hospital. We've had no admissions reported from Savaii's Hospital."

Samoa's government said most of those sick with the measles virus were children under 10-years-old and people in their 20s.

Speaking from Apia after the suspected measles related death of the toddler last week, the Deputy Director General of Public Health, Robert Thomsen, called on New Zealand to step up.

"If the outbreak in New Zealand is not under control anytime soon, then we will still continue to see a prolong with the measles outbreak here. Because now because of the travelling public, so many Samoans coming from there to here, and so many going from here to there."

"If it came from a New Zealand outbreak, I think we have some responsibility to them. And we should be collaborating and helping as much as we can. It's a consequence of a government that removed health targets.

"It's a consequence of a government that missed multiple warning signs that we were due for an outbreak. And here we are today with nearly 1800 cases of measles and now we're exporting it as well. It's simply not good enough."

New Zealand's Ministry of Foreign Affairs and Trade has responded saying the government has reached out to Samoan officials offering advice, practical assistance, and a readiness to help in any way.

The government had been working with UNICEF across Pacific Island countries to ensure the availability of vaccines, while a group of New Zealand nurses had been in Samoa delivering training.

In a statement, it said Samoa was working through its response.

"We have been engaging with Samoa, and other Pacific governments, on their preparedness for a measles response since the outbreak in New Zealand.

"Immunisation rates in Samoa dipped after the death of two infants in July 2018, due to errors in administering vaccines. After this occurred, the Samoa government launched an investigation into the deaths and suspended immunisations.

New Zealand's Foreign Affairs Minister Winston Peters said he was "very concerned" about measles spreading into the Pacific region: "Of course, we're very keen to help out, whether it be Samoa or Tonga."

When asked if more should have been done, he replied: "I'm not going to criticise Samoa. But you realise two people died last year and they suspended the immunisation programmes back then...

"There's no use...to start pointing the finger. We stand ready to help, if they want us to."

Meanwhile, across New Zealand so far, 2019 has seen 1928 confirmed cases of measles notified and 1554 of these people are in the Auckland region.

The Ministry has moved to vaccinate more babies, boosting herd immunity, and advises parents of babies aged 6-11 months living outside Auckland to talk to their GP about vaccinating at least two weeks before travelling to Auckland.

Meanwhile, Samoa has issued the following advisory on measles control: