Aquaman actor Jason Momoa has told the United Nations the oceans are in a state of emergency and it's time to return to traditional conservation practices to turn the tide on climate change. 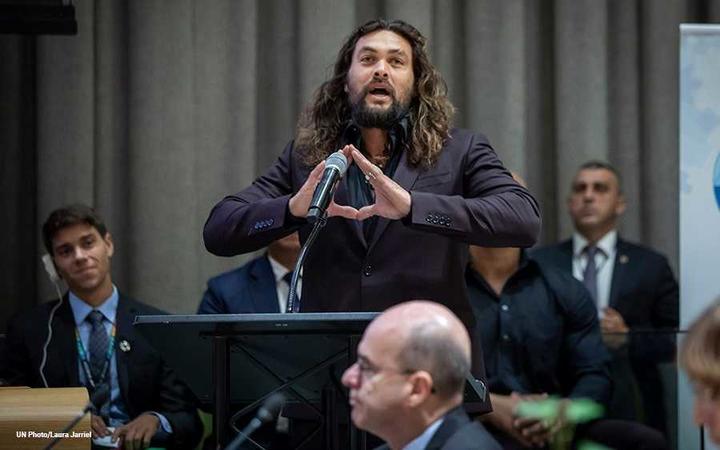 Speaking at the UN review of the SAMOA Pathway, a roundtable discussion on Small Island Developing States in New York, the ocean activist and well known actor delivered a rousing six minute speech to global leaders.

Representing island nations, he told the meeting small island countries have led the way in sounding a global alarm on the state of the earth and its seas.

Momoa said innovation and creativity have perceivably elevated humans to the most powerful beings in the world.

"Yet our ego, our fear and our relentless drive for profits have made us the only species willing to force disharmony with the natural balance of our world. We are the living consequence of forgotten traditions.

"We suffer a collective amnesia of a truth that was once understood. The truth that to cause irreversible damage to the earth, is to bring the same unto ourselves."

The native Hawaiian said he had seen first hand how one place could be oblivious to another.

He said island nations contributed the least to climate change but were made to suffer the weight of its consequences.

"Our governments and corporate entities have known for decades that immediate change is needed. Yet change still has not come," he said.

"Entire islands are drowning into the sea due to the enormous volume of emissions generated by first world countries".

He called for global unity to a global crisis, with a focus on planning and sustainability for survival and recounted a polynesian proverb, 'He va'a he moku, he moku he va'a,' the canoe is an island, the island a canoe.

“I am standing here today because I am ashamed that not all leaders have wanted agreement”, said actor, Jason Momoa, referring the groundbreaking 2015 Paris Climate pledge to limit the globe from warming beyond 1.5 degrees Celsius. #SamoaPathway https://t.co/L15z74dFLI pic.twitter.com/52SVOx5M3P

The theme of the roundtable was 'Progress, Gaps, and Challenges' with participants giving insights on the work of the SAMOA Pathway to date, and the barriers faced.