Fifteen high school students from Kiribati, Vanuatu and Fiji are learning from Japan's experience dealing with natural disasters at the World Tsunami Awareness youth conference in Hokkaido this week. 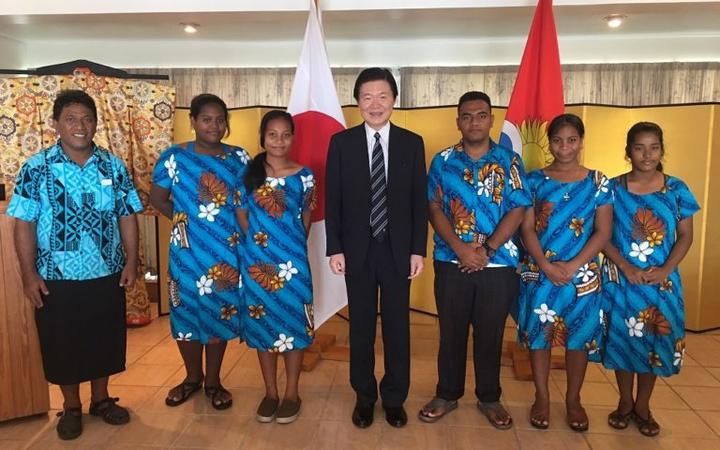 Japanese ambassador to Kiribati Masahiro Omura with a teacher and students from Tarawa who will attend a tsunami summit in Japan this week. Photo: Supplied

The Pacific students are among 210 young people from 43 countries attending the summit along with over 200 Japanese youths.

Japan was hit with a deadly tsunami in March 2011 following a magnitude nine earthquake off the country's east coast.

Noriko Tanaka, from the Japanese Embassy in Wellington, said it was important for the youth to learn about tsunamis and share their knowledge with their communities when they return home.

On Monday, Typhoon Faxai made landfall near Japan with destructive winds of up to 216kph.

The national broadcaster, NHK reported more than 900,000 homes are without power and over 130 flights cancelled with train lines also closed for hours in Tokyo.

According to the Japan Meteorological Agency, Faxai is a woman's name in Lao.

The storm comes as Japan prepares to host the Rugby World Cup on September 20 which organisers expect to draw 500,000 visitors.