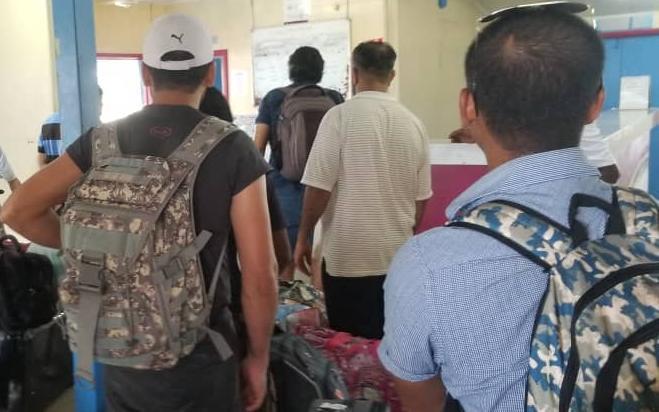 After six years, the last of the refugees will be transferred off the island on Friday, the goal of PNG's new prime minister James Marape, but for the refugees -community detention in the capital is just beginning.

Manusians said their social fabric was broken by hosting those banished by Australia, who in turn were broken mentally by their indefinite incarceration.

The PNG government said moving to the capital would be positive for the few hundred men left in the country and that they were welcome to resettle there.

"Port Moresby is one of the most dangerous cities in the world. Refugees in Port Moresby are a target. Many refugees have been attacked threatened with guns and knives, and they have been bashed and robbed," Mr Kanapathi said.

"The men who live in Port moresby do not leave their accommodation after dark because of the violence. We will be still prisoners with no safety in Port Moresby."

The most celebrated author in Australia this year is Manus Island refugee Behrouz Boochani.

The winner of four major literary prizes including the nation's richest is, however, still not welcome in the lucky country and will be forced to try his luck in Port Moresby.

"We should never forget that the refugees left their countries because of discrimination, because of persecution. Still we have this problem. The refugees are vulnerable people so we need some protection to establish a new life, but I think in this country we cannot."

"PNG is not a resettling country, it's not safe. The people who've been living in Port Moresby, many of the people I spoke to have been assaulted, not just once but some four or five times, have been robbed, have been threatened with guns and knives," Mr Rintoul said.

"I also expect there'll be much worse medical conditions. There are no mental health services to speak of in Port Moresby at all. If people have to use the General Hospital they will be way, way worse off than they are on Manus Island."

Today is the day that I've been anticipating for the past 6yrs of my life on #Manus When I transferred to Manus 6yrs ago I didn't know how long I'd be detained, or what my futur. Goodbye Manus I leave you with unfulfilled desires & desperation Manus to #Pom life in limbo #auspol pic.twitter.com/d0mzM0bSAk

Even as it pays to sustain the refugees in Port Moresby, Australia's government is likely to tout the move as the successful conclusion of offshore processing in PNG.

But can leaving hundreds of mentally ill refugees in a Melanesian capital without a resettlement programme be heralded as a success?

Mr Boochani said the move would not absolve Canberra of its responsibility to find suitable countries for those it banished for seeking Australian asylum.

"Australian government cannot run away from this problem and this situation. They are responsible but unfortunately the PNG government always follows Australia and they are part of this problem."

Mr Kanapathi said the refugees were afraid that in the PNG capital they would be forgotten.

"Our greatest fear in this relocation to Port Moresby is that people will no longer be aware of our situation and we will be forgotten. We want the people to know that moving to Port Moresby is not a durable solution. As long as we are in PNG, we are not settled and safe."

Mr Kanapathi and 35 other men were flown to Port Moresby on Thursday, with the last 35 men expected to leave Manus Island on Friday.