Refugees detained on Papua New Guinea's Manus Island have been offered relocation to Port Moresby by the PNG government. 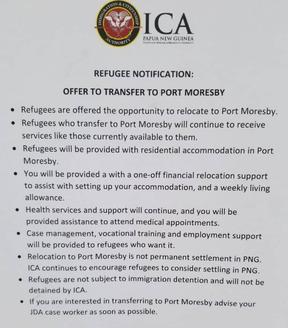 A photo of the note. Photo: Shaminda Kanapathi

A note posted in refugee compounds on the island said they would be provided with residential accommodation in the capital and financial support to relocate.

Once there, they would continue to receive a weekly living allowance, health care and assistance to attend medical appointments.

Vocational training and employment support would be provided to refugees who want them.

The note said relocation to Port Moresby would not constitute permanent settlement in PNG.

But it said the government would continue to encourage the refugees to settle there.

Refugees estimate they number about 140 men in two compounds on the island.

One of them, Shaminda Kanapathi said he thought most of the refugees would apply for relocation to Port Moresby.

However, after six years on Manus, Mr Kanapathi said the men were worried about how long they would have to stay in the capital before being offered permanent resettlement elsewhere.

The government has officially asked 120 men on Manus to transfer to Port Moresby. It means they will close Manus prison camp & continue this political game in PNG’s capital city. There are less than 350 refugees & asylum seekers in PNG in total now. pic.twitter.com/065vQR3HDV