Calm has returned to the West Papuan regency of Deiyai, where at least two protestors and a soldier were killed in a bloody clash on Wednesday, Indonesia's Foreign Ministry says. 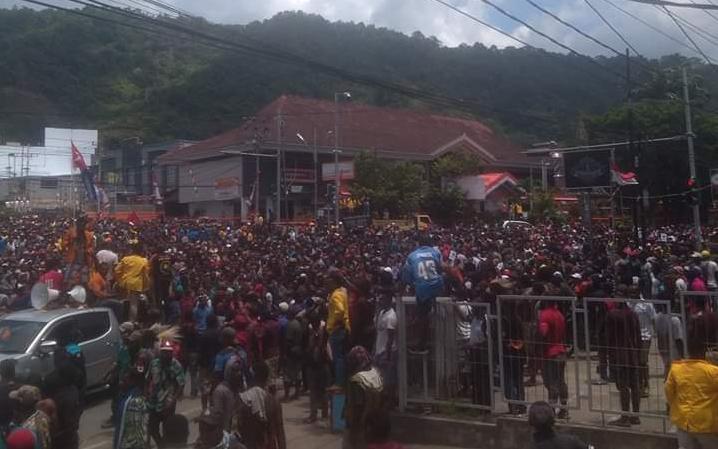 The disputed death toll in Deiyai - activists and local media reports claim at least six protestors died - marks a deadly escalation of anti-racism protests which have racked Papua for the past two weeks and given fresh impetus to the long-running independence movement there.

According to Indonesian police, military and a foreign ministry statement released Thursday, hundreds of Papuans armed with guns, machetes and bowes and arrows attacked security forces outside the local regent's office in Deiyai, killing one soldier and a protestor. Another protestor was killed by security forces who opened fire on Wednesday.

"Security personnel were extremely restrained in their response. Defensive actions were taken to control the armed group including by returning fire," the foreign ministry said, adding that smoke grenades were used to disperse the crowd. It said five security personnel were wounded and ammunition and "a number" of guns were stolen by the armed rioters. The situation in Deiyai on Thursday was "normal", the statement added.

Since the clash, Indonesian police and military have labelled media reports claiming more protestors were killed as "hoaxes". Among them was a report from news site Suara Papua which said six protestors were gunned down by security forces during a peaceful demonstration.

One of the protestors on Wednesday, Agust Mote, told the Jakarta Post that police and soldiers opened fire when Papuan demonstrators were performing a traditional dance. Another witness, Pastor Santon Tekege, told Al Jazeera protestors were agitated by the tear gas and were then shot at.

Compounding difficulties to establish facts, Indonesia's government has blocked internet access across Papua for the past week as part of what it said was an effort to combat misinformation amid widespread protests. Critics say the move may precipitate a human rights crackdown by security forces.

News outlets, including RNZ Pacific, have had difficulty verifying disputed accounts. Human rights lawyer Veronica Koman said the government had also blocked the mobile phone network in Deiyai on Wednesday. Calls to four separate numbers in the area were met with disconnection messages on Thursday morning.

Indonesia's government has done little to improve access to information. The foreign ministry called a news conference on Thursday morning and then later cancelled it with no explanation. Police and military spokespeople didn't respond to questions about the phone outages.

Elsewhere, thousands of Papuan demonstrators were marching from Wamena to Jayapura on Thursday, according to Markus Haluk, an executive with the United Liberation Movement for West Papua.