"A high standard" of healthcare is being provided to asylum seekers held in a new detention centre in Port Moresby, the Papua New Guinea immigration authority (ICA) says.

Fifty-three men not given refugee status by PNG were transferred to the Bomana Immigration Centre earlier this month after being held on Manus Island by Australia for six years.

Concerns were raised by advocates who said most of the men were mentally and physically sick and that their detention would impede possible medical evacuation to Australia.

PNG's chief migration officer Solomon Kantha said primary healthcare was "provided on site by medical professionals" and that when required, detainees were taken off site to consult specialists.

The authority continued to facilitate medical evacuations when its "health service provider advises that treatment cannot be delivered in Papua New Guinea", he said.

"ICA takes the welfare and support of detainees very seriously, with a high standard of health, security and support services provided to those in the centre," Mr Kantha said.

"Detainees can receive professional and social visits and can also access telephone communication... Personal mobile devices are a controlled item and are not permitted within the secure Immigration Centre environment."

Mr Kantha said the men were "unlawful non citizens" and that they were moved to the detention centre pending their "removal or voluntary departure" from PNG.

"These people were actively encouraged to depart PNG voluntarily and detention occurred only after all efforts were exhausted. The individuals themselves are free to depart as soon as they are issued with travel documents for re-entry into their countries of citizenship'. 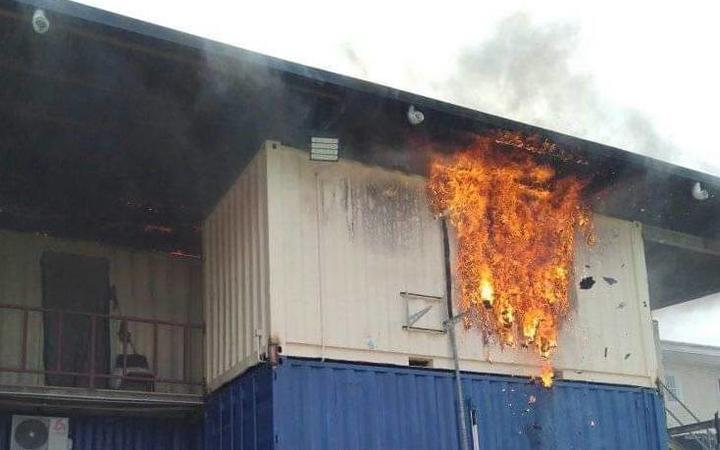 The 53 Bomana men were moved to hotels in Port Moresby after this fire at Manus Island's Hillside Haus. The men were told they would be returned when the damage was repaired. Photo: Shaminda Kanapathi

Mr Kantha continued to refer to the men as "failed asylum seekers" whose "protection claims have been fully assessed", despite reports that many refused to claim protection in PNG after being forcibly moved there by Australia.

Most of these men are from Iran who chose detention on Manus Island for six years rather than voluntary repatriation. Mr Kantha also seems oblivious to reports that Iran will not accept citizens repatriated against their will.

A report from this week's Australia PNG Ministerial Forum in Port Moresby identified there was a total of 117 "non-refugees" or "unlawful non citizens" in PNG.

Of those not yet detained in Port Moresby, Mr Kantha called for them to prepare for departure.

"The Migration Act allows ICA to remain flexible with those who make efforts to abide by PNG law and there is no reason to detain anyone cooperating with voluntary departure. To these individuals, I encourage you to speak with ICA regarding the financial assistance package that is available to you, to start making arrangements to depart PNG and to move on with your life."

With about $AU20 million from the Australian government, the new detention centre has been built alongside the notorious Bomana prison.

The immigration chief, however, sought to clarify that the Bomana Immigration Centre was not connected to the existing facility.

"The centre is a stand-alone, purpose-built facility and is in no way an annex of any other facility."