Health authorities in New Zealand are warning people travelling from Auckland to the Pacific to make sure they are vaccinated against measles.

It's part of a wider warning to all people preparing to travel to and from New Zealand's biggest city, where a measles outbreak has intensified. 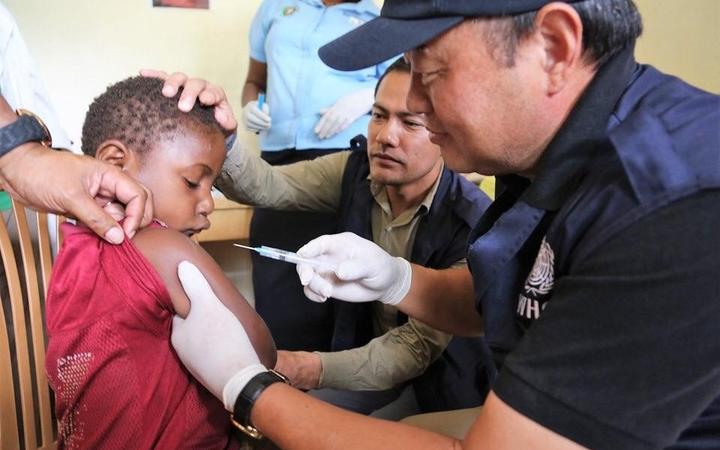 WHO Representative Dr Luo Dapeng administering the measles-rubella vaccine to a child in Jiwaka province. Photo: Supplied/ WHO

New Zealand's Director of Public Health, Caroline McElnay, said a lot of people in Auckland had close ties with the Pacific region and that with school holidays approaching, many might be planning to travel.

"As people who may not be aware that they've got measles but are in the early stages of infection, as those people travel overseas, and that includes the Pacific, and we know there's a lot of people from Auckland do travel to the Pacific, there's a real chance that they may infect others when they're in the Pacific," she said.

People can be reassured the MMR vaccine is very safe, she said.

The World Health Organisation's Regional Director for the Western Pacific has previously warned measles is making a swift comeback in communities where not enough children are immunised.

The WHO said the incubation period is 10-14 days from exposure to the onset of measles rash and patients are contagious four days either side of the rash appearing.

The New Zealand Ministry of Health advises people who have early symptoms of measles such as a fever, cough, runny nose or sore eyes not to travel.

More information on measles is available on the Ministry of Health website.