With just over a fortnight left before the opening of the Pacific Games in Samoa a ceremony has been held in Faleata to mark China's handing over of a brand new multi-sport centre and the completion of refurbishment work on existing games venues.

Speaking at the ceremony yesterday Samoa's prime minister Tuilaepa Malielegaoi thanked China saying the building of the Multi-Sport Centre aligns with the government's vision to grow Faleata as the sports hub of Samoa and the Pacific region. 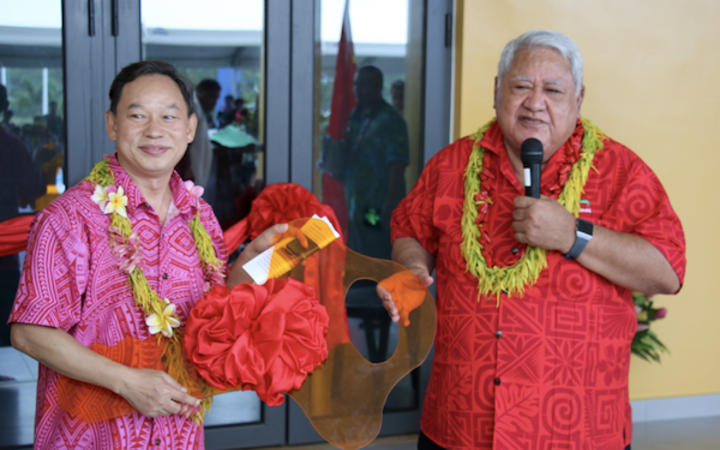 The ambassador of the People’s Republic of China, Chao Xiaoliang hands over the key for the Multi-Sport Centre to Samoa Prime Minister Tuilaepa at the handover ceremony on 20 June 2019. Photo: Supplied

The Multi-Sport Centre consists of two state-of-the-art indoor and outdoor netball courts built to international specifications. It also has the capacity to host badminton, basketball, table tennis, boxing and other indoor sports.

As well as the construction of the new indoor sports complex China has refurbished the Samoa Aquatic Centre, Apia Park Stadium and their Tennis Courts.

Samoa will host more than 3,500 athletes from 24 countries in oceania for the two weeks of games which kick off in Apia on the 7 July.