Confusion reigns in Papua New Guinea politics after Prime Minister Peter O'Neill announced that he would be stepping down. 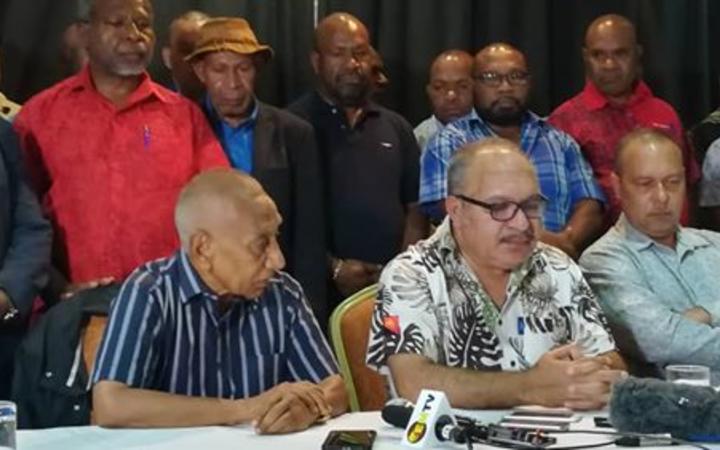 Pressure has been building on Mr O'Neill to resign for more than a month amid defections from his coalition government by key allies and members of the ruling party.

However, his announcement that he would step down in coming days and hand over to his coalition partner and former prime minister, Sir Julius Chan, has put a cat amongst the pigeons.

Leading figures in the opposition, which had been planning a vote of no confidence against Mr O'Neill, said they wouldn't believe it until he officially tenders his resignation to the Governor-General.

Furthermore, as former Chief Justice Sir Arnold Amet said, the prime minister cannot simply pass the role on to someone else.

"When he tenders his resignation he remains prime minister until the parliament elects a new prime minister who will then be sworn in," Sir Arnold said. 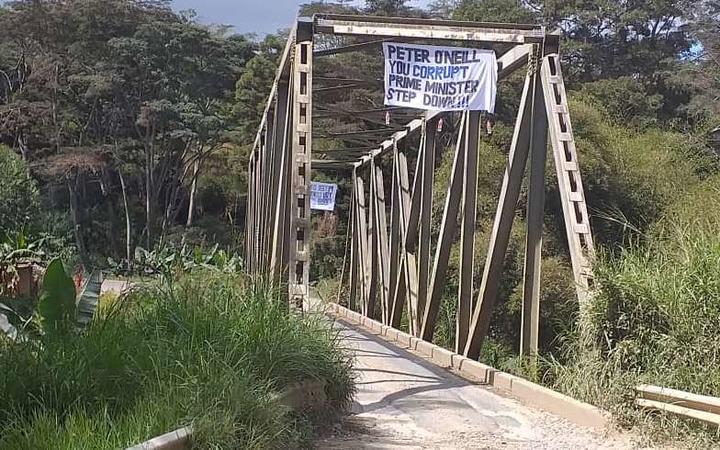 A banner on a bridge in Papua New Guinea's Eastern Highlands hangs in opposition to Peter O'Neill. Photo: Supplied / EMTV

According to Sir Arnold, after tendering his resignation, Mr O'Neill would be acting prime minister until the process to elect a new prime minister gets underway in parliament.

Sir Julius, who was effusive in his praise of Mr O'Neill's announcement yesterday, today said there had been a huge misunderstanding concerning yesterday's news conference.

He conceded that Mr O'Neill didn't have the power to appoint him as prime minister.

"Peter O'Neill simply designated me the provisional caretaker of the government coalition," Sir Julius said in a statement.

"He simply asked me to help by maintaining order among the members of the coalition and helping the coalition to work with all parliamentary members to make a wise and uniting decision concerning who should become the next Prime Minister."

O'Neill goes to the courts

A day after announcing he would step down, Mr O'Neill revealed he was initiating legal action over a motion of no confidence lodged recently by the opposition.

A move which may delay his resignation, he is seeking a Supreme Court interpretation on rules around confidence votes, claiming there is confusion around the constitutional process that led to the withdrawal of the opposition's motion last week.

In his application to the court, Mr O'Neill said that a no confidence motion was a serious constitutional process and that its withdrawal was unprecedented and disrespectful.

Mr O'Neill said his application was necessary to "prevent any legal motions that are an abuse of integrity laws and the Constitution".

A week ago the opposition withdrew the motion and had committed to lodge a new one, however the prime minister yesterday announced his intention to step down.

A spokesman for the prime minister said Mr O'Neill would visit the governor general ( to formally tender his resignation) after the rules on votes of no confidence are clarified.

Under PNG's constitution, there is a provision for the deputy prime minister to take up the vacancy when a prime minister steps aside. But in this case of yesterday's announcement, Mr O'Neill seemingly overlooked his deputy, Charles Abel, and created confusion over who will be in charge from this point.

The Gazelle MP Jelta Wong, who left the government coalition on Friday along with other members of the United Resources Party, said Mr O'Neill's announcement opened the way for chaos.

"So it's cause for concern, trying to make a constitutional crisis." 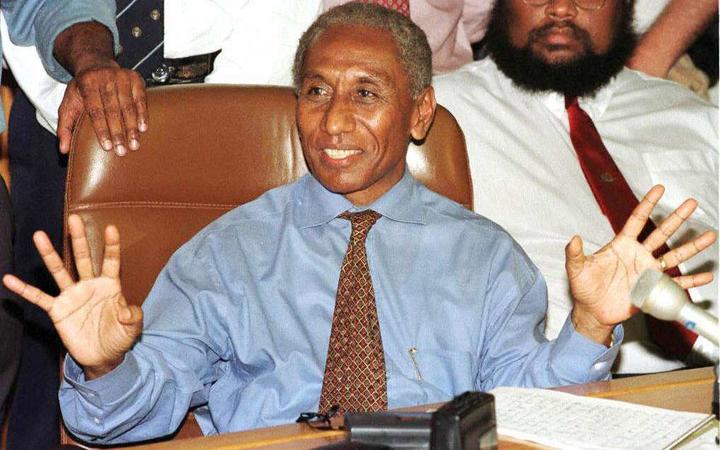 Julius Chan was last Prime Minister of Papua New Guinea in the 1990s. Here he speaks on the day of his resignation on 26 March, 1997. Photo: AFP

Inconsistent statements by the prime minister since yesterday is adding to the confusion. While acknowledging the need for a change in government at the news conference, he later issued a statement arguing that his People's National Congress party and its policies should continue as the core of government.

"The point must be made very clearly that this is not a change of government, it is the continuation of a government agenda that has changed our nation for the better," Mr O'Neill said.

Mr O'Neill said he recognised the people of PNG were calling for change and a new direction in PNG politics. But he decided to "hand over" power "for the remainder of this term of parliament" to a 79-year old with his own significant baggage as a national leader.

According to Sir Julius, he was not seeking to be prime minister but is ready to take on the role because PNG needs experienced leadership at this juncture.

"It's not about numbers. Running a government is a very difficult thing to do," the New Ireland governor said, suggesting that he was working to avert a period of political instability ensuing.

"We have to admit the country is facing huge problems, if the members of Parliament - and I mean both opposition and government - feel I can contribute to dealing with those problems over the next year or two, then I am willing to do whatever I am asked to do to help make that happen."

However, Sir Julius would first have to resign as a provincial governor before taking on a position leading the national government executive.

"I am governor of my province and legally remain so unless I am called to take up a post at the National level and sworn in as such," he said.

Meanwhile, the veteran leader indicated at yesterday's press conference that under his government, the country's mining laws would be reviewed, a move which will make the industry nervous.

Parliament is due to sit tomorrow. If Mr O'Neill formally resigned in the coming days, a vote for a new prime minister could be held later in the week.

Although the chances of it happening this week became dim after the prime minister's court action, a vote for a new prime minister is still being described by the opposition as inevitable.

Sir Julius would not necessarily be the favourite. Given that Mr O'Neill has at this stage lost his majority, the opposition has the ability to elect a new prime minister, if it stays united.

However that is the danger of the current confusion. Since laast month the opposition gained momentum, and bolstered its ranks with defecting government MPs, because it was unified behind the aim of removing Mr O'Neill.

But if Mr O'Neill is leaving the role, the vote becomes a free-for-all, rather than a direct confidence vote between the incumbent and an alternative.

Leaders of various blocs in the opposition are hungry to become prime minister and would now be tempted to put their hat in the ring.

Intensified competition for the top job could create discord in the opposition and undermine its chances of creating a new-look government. In that sense, by nominating Sir Julius, the prime minister has thrown a grenade into the opposition ranks.

It may be too early to call it a parting shot. Going to the courts to further delay his resignation, Mr O'Neill is keeping everyone guessing.