Police have released two of the union leaders taken in for questioning this week in Fiji.

More than thirty union members were in police custody overnight including the national secretary of the Fiji Trades Union Congress, Felix Anthony.

The arrests came amid protests by workers at the Water Authority and ahead of a planned nationwide protest and march at the weekend. 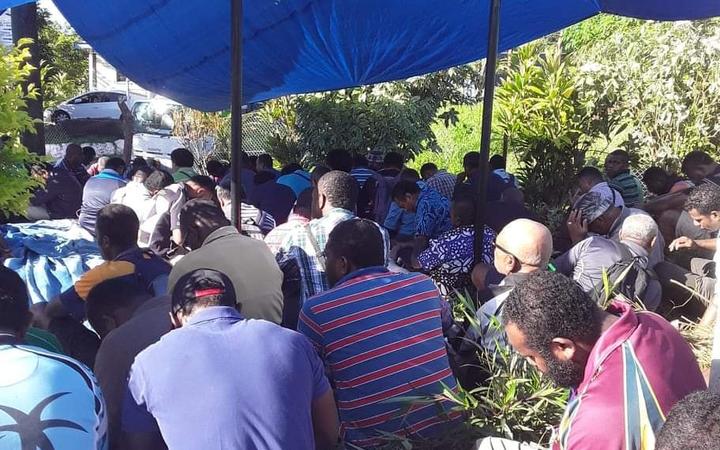 Water Authority of Fiji workers wait outside the company's Kinoya station in the capital this morning. Photo: Supplied

The congress' assistant national secretary Attar Singh said he did not know yet whether the released pair, the general secretary of the Fiji Nursing Association and a representative of the National Union of Workers had been charged.

He said Mr Anthony had still to be questioned further by police.

"We were told his interrogation was to be resumed around 10 o'clock. Unfortunately when we inquired our lawyers were told that the police has delayed the resumption of the interrogation so at this point in time I understand Mr Anthony is still in the lock up in a police station in the suburb of Nabua," Attar Singh said.

The FTUC board is meeting this afternoon to decide what should happen regarding planned protests nationwide this weekend, Mr Singh said.

The union had applied for a police permit to march in Nadi on Saturday over several labour issues.

"The members have been told to be prepared so nothing has changed in that respect except the police have been acting rather high-handedly."

He described as nonsense government accusations the unions were trying to derail the Asian Development Board meeting in Denarau this week.

The government had also said it was deeply concerned after a meeting with labour, employer and government representatives before Mr Anthony's arrest that the union leader was not interested in working with anyone to uphold the interests of workers in Fiji.

"The government has got to be honest and tell the people of Fiji the tripartite discussions we were having ... were very close to reaching and signing a joint statement and had that happened tripartisim would have been alive in Fiji," Mr Singh said.

Mr Singh said the government had derailed the tripartite process and aggravated the situation by rubbishing the union movement.