Villagers on Rennell Island in Solomon Islands claim that a ship that grounded on a reef in Kangava Bay two weeks ago is leaking oil. 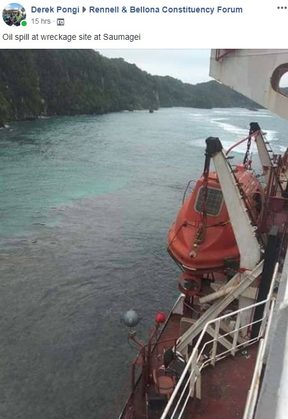 A picture provided by Mr Pongi which he claims shows the ship is leaking oil into the bay. Photo: Supplied/ Derek Pongi

The MV Solomon Trader ran aground while loading bauxite from a nearby mine.

Earlier this week the director of the National Disaster Management Office (NDMO), Loti Yates, said the vessel was not listing and there was no oil spill.

But Rennell's Derek Pongi said islanders refuted reports by the ship's owner and the government that there is no oil spillage.

"There's some spillage from the vessel. You can see changes in the oil content of the sea. But the company is saying that it's not oil, it's other things in the ship. But I can confirm that there are more fuel content in the sea area surrounding the vessel."

But he said they want the vessel removed from the bay before it suffers further damage.