Recent violence in Papua is the result of grievances in the region that Indonesia is failing to address, the UN human rights office says.

The bodies of 16 people were retrieved from the Highlands region last week, after a group of Indonesian construction workers were massacred.

The West Papua Liberation Army, which has claimed responsibility for the killings, has claimed the workers were Indonesian military in disguise.

But she said the root causes of the simmering conflict in Papua were not understood or addressed by Jakarta.

"There are many grievances, and we've seen this in many parts of the world, where grievances are unaddressed, or there is a suppression of descent, and then people take the law into their own hands because they feel they are not being heard," she said. 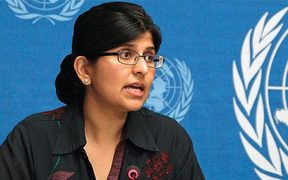 "This is actually happening at a very low level in Papua at the moment."

Although massive construction projects in Papua funded by Indonesia were improving well being in the region, they were not necessarily involving Papuans in consultations, she said.

"If they cannot voice their concerns and if they can't participate in these decisions, the resulting development may not really increase their welfare because it doesn't really address the problems that they have."

Ms Shamdasani also said the OHCHR was concerned about the large number of arrests in Indonesia during peaceful demonstrations held to commemorate West Papuan National Day on December the 1st.

More than 500 arrests took place, including hundreds detained in searches of student dormitories, as security forces prevented demonstrators from conducting peaceful rallies. All of those detained have since been released without charge.

In the city of Surabaya in East Java, where the largest demonstrations took place, security forces were reported to have used excessive force during a demonstration.

Ms Shamdasani called on Indonesian authorities to ensure that security forces exercise restraint when policing demonstrations, and that the rights to peaceful assembly and freedom of expression are respected.