The Duchess of Sussex has been whisked through a market in the Fiji capital of Suva more quickly than planned as crowds thronged to meet her. 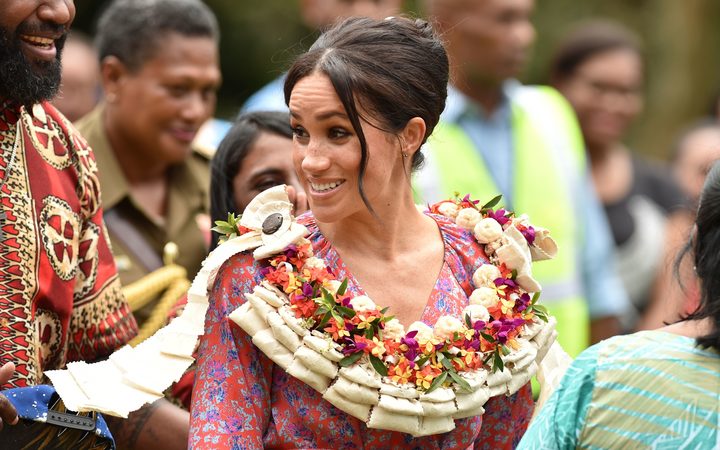 Meghan, Duchess of Sussex, at the University of the South Pacific in Suva. Photo: AFP

Prince Harry and Meghan, the Duchess of Sussex, arrived in Fiji yesterday for a three day trip.

The Duchess was due to spend 15 minutes speaking with vendors at Suva Municipal Market to learn about a UN Women's project which promotes female empowerment.

But she was escorted through in about six minutes due to what Kensington Palace reportedly said was a security risk due to excessive crowds.

Meghan was really rushed through #Suva market and spent less than ten minutes there. The palace said she did meet the women she was meant to, but there were lots of disappointed Fijian’s who said it was too fast and the security too tight pic.twitter.com/Bqmd9mkgbm

Earlier, Prince Harry told those gathered for a state dinner in Suva the ties between Fiji and the UK ran deep and the two countries shared Commonwealth values, a love of rugby and a sense of humour.

He said Fiji was looked to for leadership on environmental issues. 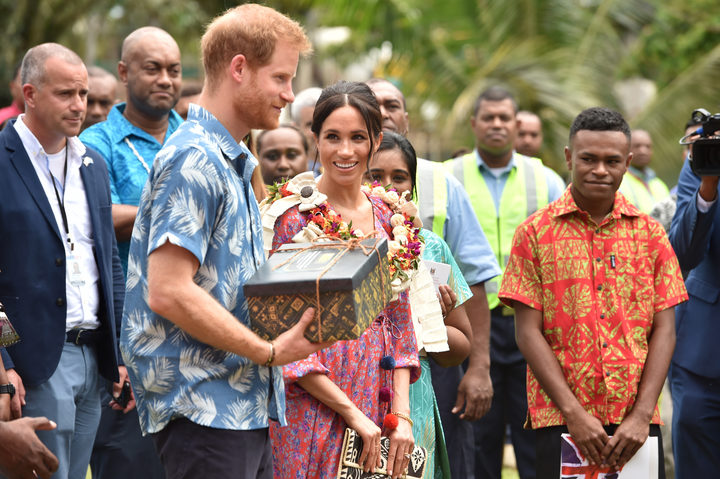 Prince Harry and wife Meghan, Duchess of Sussex, receive a gift from the University of the South Pacific in Suva. Photo: AFP

Prince Harry said it was a nostalgic visit as his grandparents had stayed at the same Grand Pacific Hotel.

"This visit is also an opportunity to learn more about the future of Fiji. Your economic growth, sustainable tourism development and social enterprises. We're really looking forward to meeting the students at the University of the South Pacific and the young leaders from all walks of life."

At the university, the Duchess of Sussex gave her first speech of the couple's tour.

Addressing students, she spoke of the vital importance of education for girls in developing countries.

She announced two grants which would allow the University of the South Pacific and Fiji National University to run workshops to empower female staff.

Prince Harry also praised Fijian soldiers in the British armed forces, saying he had much respect and admiration for those he had served with in Afghanistan.

He wished the people of Fiji the very best for a successful election in November.