Four West Papuan students were arrested on Tuesday for showing the Morning Star flag, as Indonesian universities crack down on pro-independence displays.

Antara News reported the students in Jayapura were carrying bags on campus displaying the symbol.

The four students at STIKOM Muhammadiyah university were arrested for a few hours before being released later on Tuesday.

The arrests come two weeks after two students from Cenderahwasih University in Jayapura were arrested for wearing bracelets bearing the Morning Star and singing Papua Merdeka, a song promoting independence for the region.

After that incident, the university's director signed an agreement that Morning Star symbols could not be brought on campus.

Indonesian human rights lawyer Veronica Koman said Tuesday's arrests were likely "inspired" by a growing opposition to the use of the Morning Star at universities. 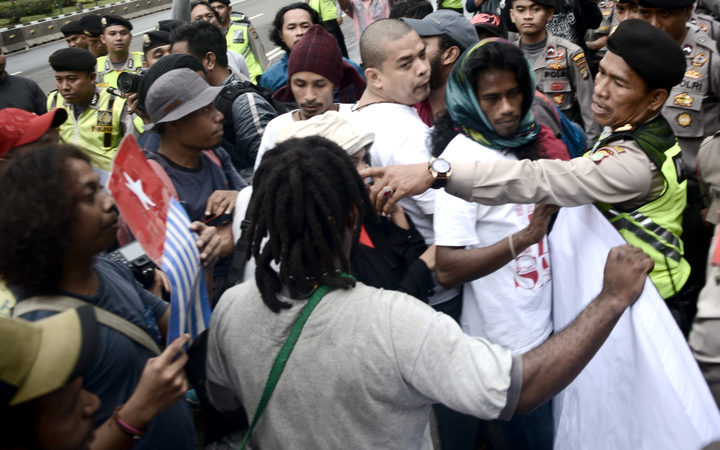 An Indonesian police officer tries to remove a West Papuan pro-independence "Morning Star" flag from a demonstrator during a protest by mostly university students from Free Papua Organization and the Papua Student Alliance in Jakarta on April 3, 2017. A low-level insurgency has simmered for decades in resource-rich Papua, with Jakarta keeping a tight grip on the region through a heavy military and police presence. Photo: AFP PHOTO / GOH CHAI HIN