A refugee advocate says problems with the US resettlement deal have been exposed with the departure of 18 refugees from Manus Island.

The men had been detained in Papua New Guinea since 2013 and are among 265 refugees from Australian offshore detention to leave for America. 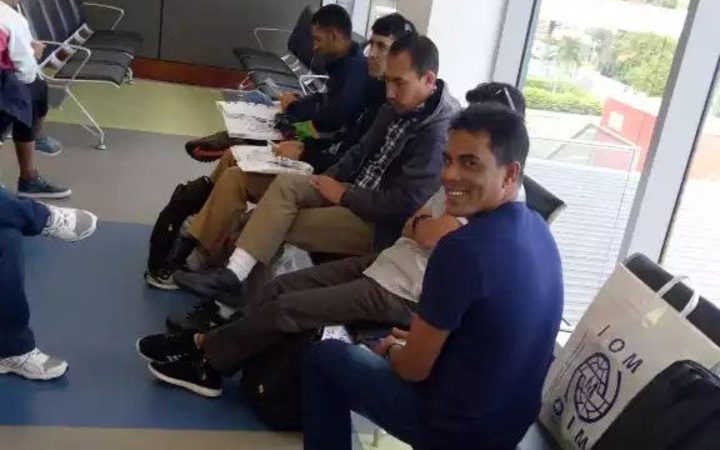 The 18 comprises 13 Afghans and five Rohingyans but no one from countries banned from the US by President Donald Trump that includes Iran and Somalia.

Figures from the Refugee Council of Australia show about 1000 people from those countries are detained in PNG and Nauru where a total of about 1700 refugees remain in exile.

Under the deal struck with Canberra in 2016, Washington agreed to take up to 1250 of the refugees.

Advocate Ian Rintoul says with refugees from the banned countries not being taken, the deal has degenerated into a farce.

"(Home Affairs Minister) Peter Dutton has admitted that the government has no other countries for resettlement yet refuses New Zealand's offer to resettle 150 people," Mr Rintoul said.

"The suggestion that he would allow refugees to go to New Zealand if they were banned from ever travelling to Australia is completely vacuous. Dutton is pitching for another go at the rejected 'lifetime ban' bill."

The bill, which proposed that all refugees and asylum seekers detained offshore be banned from ever entering Australia, failed to pass the Senate.

Mr Dutton initially refused the New Zealand offer on the basis that once refugees became permanent residents, they could obtain visas to enter Australia on arrival.

When asked whether it would be possible to stop New Zealanders from entering Australia, Mr Galloway said he thought it was possible but "that was a matter for Australia".

"I think once people come to New Zealand they'll want to live in New Zealand. It's a very welcoming country with lots of opportunities. It's over to Australia to decide what course of action they want to take," he said.

Kurdish journalist and Manus Island refugee Behrouz Boochani argued that after cruelty inflicted on them in detention by Australia, none of the refugees wanted to go there.

No one on Manus and Nauru is keen to go to Australia if we go to New Zealand. Let us go and finish your official hostage holding. For a long time the Australian government has lied about New Zealand's offer. NZ has today made clear there are no excuses. https://t.co/3iCWIaTqpQ