As Vanuatu's government prepares to evacuate Ambae Island after volcanic activity intensified, volcanoes on other islands remain in a state of unrest. 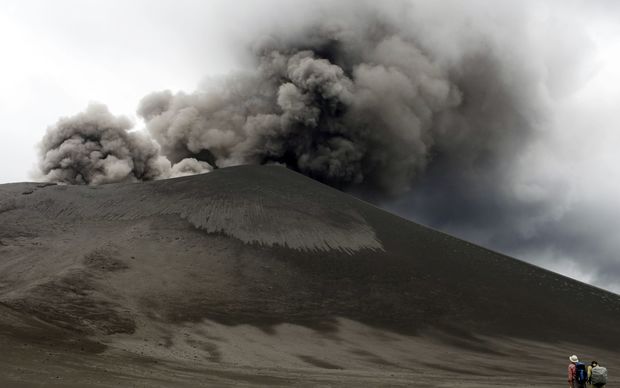 A giant plume of volcanic ash billowing from Mount Yasur volcano on Tanna Island in Vanuatu on May 26, 2010. Photo: Ulla LOHMANN / AFP

Ambae's Manaro Voui crater is at alert level three of five, posing a threat to the health of the island's 11,000 inhabitants, who are being encouraged by the government to evacuate.

Nearby, a level two alert is in place on Ambrym, according to the Geohazards Department, with exclusion zones around the erupting Benbow and Marum craters.

A geohazards analyst Melinda Haru said the main threat for the people of Ambrym outside those zones was gas emitted by the volcano.

Gaua's volcano is also in a major state of unrest, blasting out steam and gas. With Gaua's Mount Garet at alert level two, visitors to the cone are being warned of the danger this poses.

The Lopevi volcano is also at level two but the threat to life is minimal given few people live on Lopevi after mass evacuations in 1939 and 1960.

Vanuatu's major tourist attraction, Mount Yasur on Tanna continues to erupt as it has for many years, with the department saying the threat is confined to the crater.

Suretamatai on Vanua Lava is at level one with the threat limited to people who approach the crater.