The evacuation of residents on the ash-covered Vanuatu island of Ambae is finally getting under way, as food supplies dwindle and disease starts to spread. 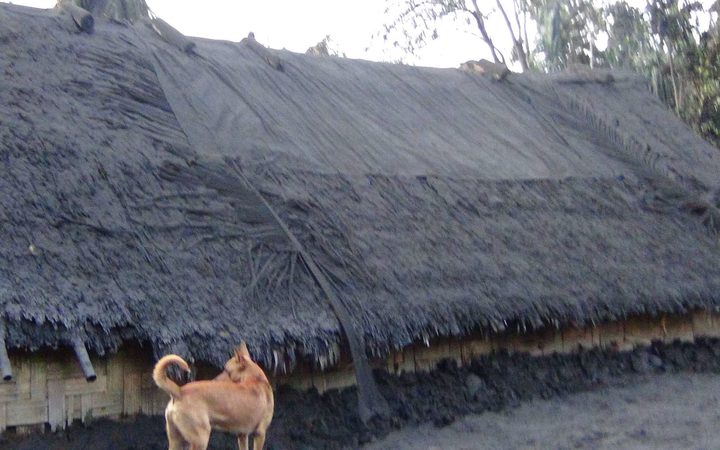 The default colour of Vanuatu's Ambae has become an ashen grey, with a volcanic eruption covering nearly every surface with ash. Photo: Facebook / Penama Provincial Update

The layer of ash in William Bice's village is some 20cm to 30cm thick. It has smothered plant life, its weight has collapsed some roofs, and the stream that supplies their water has turned into a thick ash-laden sludge.

Father Bice, a local Anglican priest, said the village in the north of Ambae lived off the crops it grew, which are now dead, and its only income came from a small stash of kava which had also been smothered.

His experience is one being lived across Ambae, an island of some 11,000 people about halfway up the Vanuatu archipelago. The volcano at its centre, Manaro Voui, stirred into life in September, forcing the hurried evacuation of the entire island.

It settled little more than a month later, and everybody returned to try to restart their lives. In March however, the volcano stirred once more, blanketing the island in ash, acid rain and sulphuric fumes.

The people of Ambae are once again in need, and the government is considering evacuation. 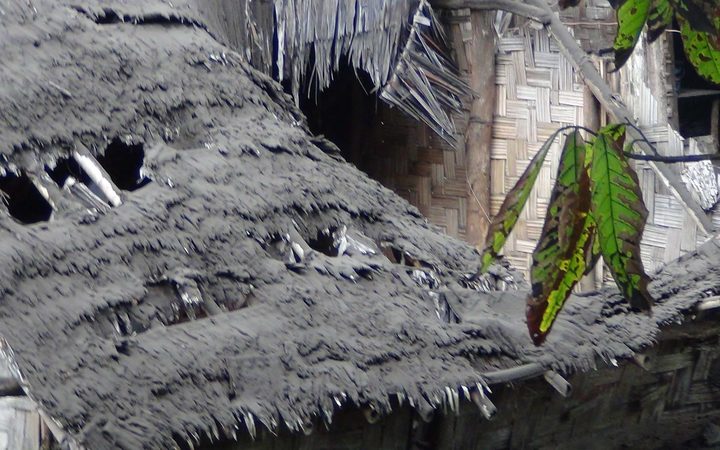 Disease was also a worry, he said. The village was living off a limited supply of rice supplied by the provincial government, and the only vegetables were those they managed to forage from the ash and dry in the sun before their crops died out.

People were breathing in the ash and fumes, he said, and there was a diarrhoea outbreak in the village.

"At the moment we have an outbreak of flu and sore throat because of the smell of the volcano," he said.

Doctors and officials on the island were stretched, he said.

In the northeast of Ambae, the 383 students of St Patrick's College were ordered home last Friday, when the school made the decision to cancel exams.

The school's principal, Kathleen Tahi, said ash had swept into the valley where her school sits - some 19km from Manaro Voui - and invaded every building, making breathing a battle. 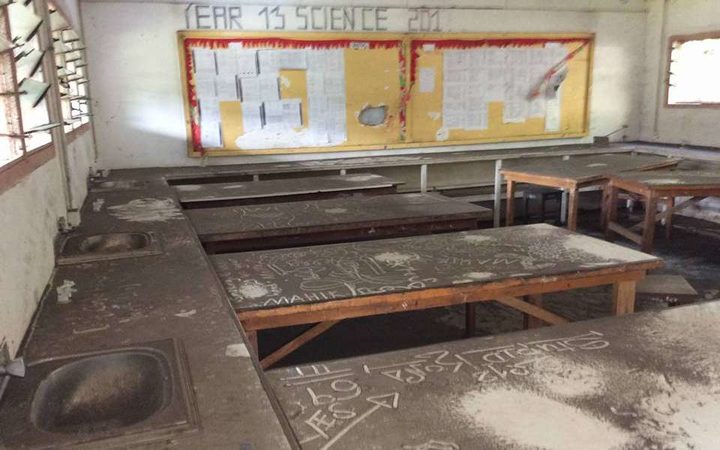 That had been their life since the end of March, she said, and before the decision was finally made to close the school, students had little.

"Our water tanks are all contaminated," said Ms Tahi. "The students had no vegetables, nothing to eat, and the students just ate [two minute] noodles."

A patrol boat deployed from the capital, Port Vila, with police and paramilitary personnel arrived on Ambae on Wednesday as the national response finally got into full swing.

The plan, according to Presley Tari, a spokesperson for the National Disaster Management Office, was to move people from the worst-affected areas to Ambae's east coast. But with Manaro Voui still stirring, a mass evacuation was still being contemplated.

This time, though, the government appears to be in less of a rush than in September.

The Disaster Office said it was working through "phases" of evacuation, starting with moving people to the east, and then deciding whether to go further from there.

Andrew Parker, the head of the United Nations children's agency, UNICEF, in Vanuatu, said 750 people had already been moved across the island by Thursday afternoon.

He said the government was looking at taking a nuanced, methodical approach.

"The government does not wish to get into an endless evacuation and repatriation circuit and hence is looking at the reality that Ambae's volcanoes are not likely to become totally dormant in the short term," said Mr Parker.

Presley Tari, a spokesperson for the National Disaster Management Office, said the paramilitary were now going village-to-village carrying out assessments and helping people move. Centres had been set up with food and water in the east, he said, which were ready to take evacuees. 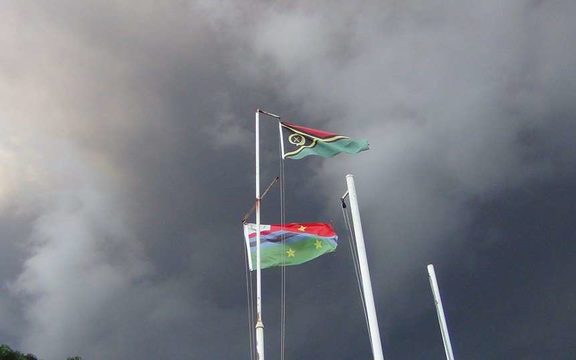 Having settled in October, allowing the residents of Ambae to return, Manaro Voui stirred to life again in March. This picture, taken on 29 March, shows the smoke billowing across the island. Photo: Facebook / Penama Provincial Update

However, amid signs that volcanic activity may be starting to ease - possibly briefly - Mr Tari said officials would wait until they had carried out assessments for four days before a decision to flee the island again would be made.

"After [four days] they'll come up with a report for the on-island relocation and then our next step is the off-island relocation," Mr Tari said. "So that's where we're going to make another decision whether we're still going off island or not."

Mr Tari said provincial officials were talking with chiefs on the nearby islands of Maewo and Pentecost about buying land for possible resettlement, but there were some issues to be smoothed over.

A reconciliation ceremony was due to be held on Santo, the nearby big island with the large town of Luganville, after some landowners were rankled with how last year's evacuation was handled. The provincial government there is understood to also be unhappy with the expense it had to shoulder, and wants outstanding bills settled.

However, Mr Tari said he was confident these would be overcome.

If a response was under way, that was news to William Bice on north Ambae.

Father Bice said the government response had not been good enough, with villagers waiting for weeks in limbo to hear when - and where - they may go.

"People keep coming, they say they have no food and they say that in a couple of days there will be no food for them," he said. 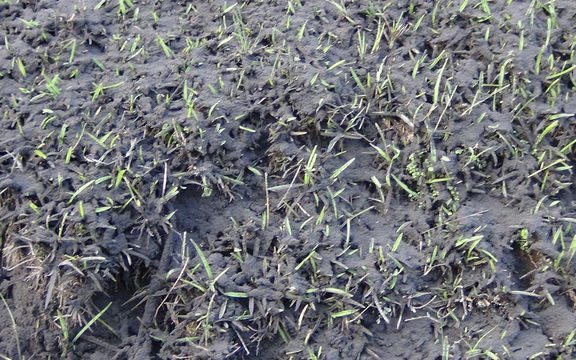 Ash from the eruption of the volcano on the Vanuatu island of Ambae has smothered crops. In some areas it's as thick as 30cm. Photo: Facebook / Penama Provincial Update

"The government should do something very quick to save people's lives."

Ms Tahi said her school had heard little from officials, too, and they were also waiting to hear what would happen to them.

The frustration has also borne out in Port Vila, where the opposition leader in parliament, Ishmael Kalsakau, called the handling of the disaster "a shambles."

He said the emergency had been building for weeks and the people of Ambae were getting anxious and frustrated.

The government is yet to respond to requests for comment. 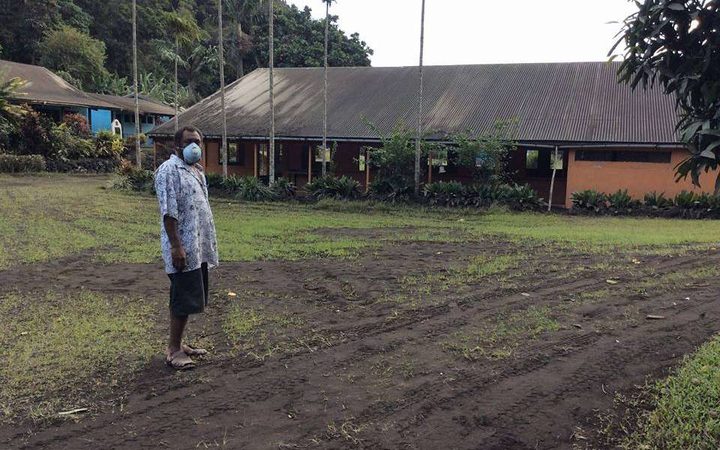 The ash from the volcano on Ambae has forced the closure of St Patrick's college, which has been covered in ash. Photo: Supplied / St Patrick's College