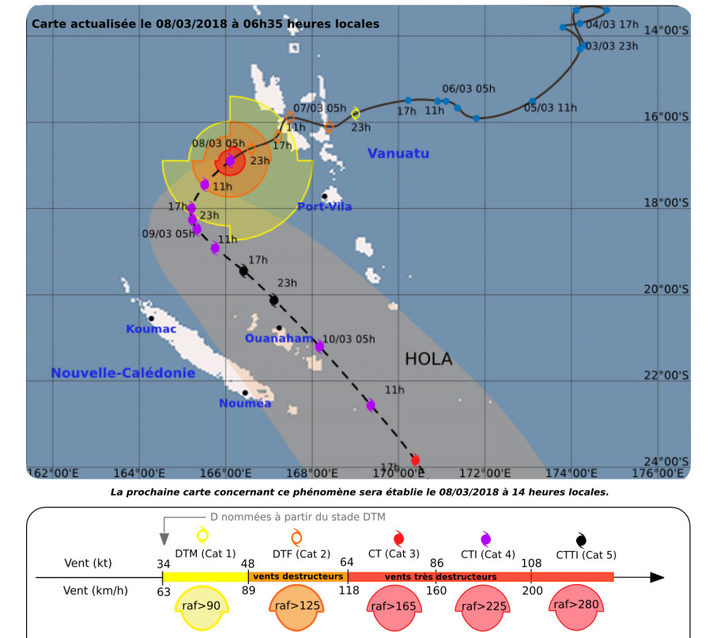 After moving south west from Vanuatu's Malekula the system was 400 km north of Ouvea early today and is moving southwest at about 10km/hr.

The Met Office in Fiji said the cyclone was a category four storm and is expected to eventually reach category five.

Hola is currently generating winds estimated at 165 km/h gusting up to 230 km at its centre and is expected to continue moving south-west strengthening on Thursday and Friday.

Hola is expected to bend its course south-east overnight and is predicted to be 225 km north-east of Bélep by Friday morning.

The cyclone set to spend the night from Friday to Saturday very near the Loyalty Islands with gusts of about 200 km/h.

On its current trajectory the cyclone is expected to bring winds of up to 85 km/h to parts of the New Caledonia main island Grande Terre as it travels past its south east areas on Saturday.

The Vanuatu weather office said damaging gale force winds of 75 km/h will continue through today to affect Malampa province while destructive storm force winds of 130 km gusting to 160 km are forecast over the next 24 hours.

Very destructive hurricane force winds of up to 175 km gusting to 185 km/h will affect Malekula.

The Vanuatu Red Cross said Malekula and Ambrym islands in Malampa Province appeared to be the worst affected by Tropical Cyclone Hola.

We’re getting reports of minor to moderate damage to property and buildings in the central parts of Vanuatu. These images were taken by Facebook user Sam Bong in Ranon village, Ambrym island. #TCHola pic.twitter.com/J2uGqueSbs

He confirmed school classrooms were also damaged on Ambrym but there had been no reports of any injuries and the principal said the children were safe.

He estimated 20 to 30 percent of houses on Malekula may be damaged or destroyed with the north of the island sustaining the worst effects of the cyclone.

Mr Manvoi said most of the damaged homes were traditional style houses.

Denny Manvoi said many people stayed in evacuation centres such as churches overnight as the cyclone passed.

He said there didn't appear to be any major damage in the Port Vila area and Tropical Cyclone Hola has now moved away to the southwest of Vanuatu.

Red Cross volunteer in the west of Ambrym, Bong Kimmy, said the wind there was very strong and the seas were rough.

The weather had been fine yesterday morning but changed quite suddenly around midday, he said.

Most people had heeded the warnings and moved away from the coastline but others did not get the warnings as the cellphone network was damaged, he said.

But by afternoon, as winds built, more people had started to move to evacuation areas and safer buildings such as churches.

A Disaster Office red alert warning had been issued for the four provinces of Sanma, Penama, Malampa and Shefa, which covers much of the country.