Refugees in Port Moresby have been told to voluntarily return to Manus Island with dignity or be compelled to go back. 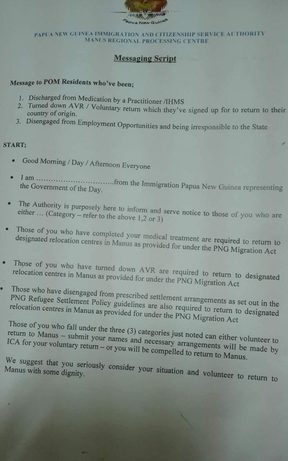 Refugees in Port Moresby were advised to return to Manus Island with dignity. Photo: supplied

Three groups in the capital were targeted by the Papua New Guinea Immigration Authority.

The first group consisted of refugees in Port Moresby for medical treatment who had been discharged by a doctor.

The second contained men who agreed to return to their countries of origin but had since declined.

The third was said to have disengaged from employment opportunities.

It was unclear how many refugees were being targeted, but between 100 and 200 men are thought to be living in various lodges and motels across the capital.

About three dozen men were forcibly returned to Manus from Port Moresby this month, some of whom had been receiving medical treatment yet were said to have unresolved health issues.

Others had failed to resettle in PNG due to what activists said was a lack of support such as welfare, jobs or trauma counselling.

Their return prompted a reminder from the journalist and refugee Behrouz Boochani that refugee accommodation on the island was already over crowded.

Even though the PNG government had not granted them refugee status, the assessment acknowledged they would not be deported due to the "real risk" of torture or death if returned to the countries they fled.

A refuge in Port Moresby for medical treatment said he had been told by an official that the authority was trying to grant refugee status to men who had received a positive assessment.