Some asylum seekers detained by Australia on Manus Island have been told they will be removed from Papua New Guinea but not sent back to their countries of origin.

They received the news last week in a bizarre letter from the PNG immigration authority. 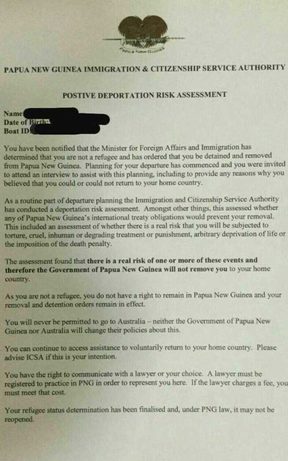 It said as the men were not refugees, planning for their departure had commenced although they would not be sent home due to the risk they would be persecuted.

"As a routine part of departure planning the Immigration and Citizenship Service Authority has conducted a deportation risk assessment. This included whether there is a real risk that you will be subjected to torture, cruel, inhuman or degrading treatment or punishment, arbitrary deprivation of live or the imposition of the death penalty.

The assessment found that there is a real risk of one or more of these events and therefore the Government of Papua New Guinea will not remove you to your home country."

The letter said the men had no right to remain in PNG and would never be permitted to go to Australia, but that they could access assistance to voluntarily return home.

It said they could communicate with a lawyer, although their refugee status determination process had been finalised and could not be re-opened under PNG Law.

But the process was flawed, according to the Kurdish journalist and Manus refugee Behrouz Boochani, who said some men had been too traumatised to participate properly.

He said others had refused to apply for fear they would be forced to settle in PNG.

"Instead of putting pressure on them the government should give them a chance to be part of the American process," said Mr Boochani.

"It's their right to start a new life after nearly five years of suffering."

So far about 85 Manus men have been resettled in the US, with vetting continuing under the deal for America to take up to 1250 refugees from Australian offshore detention.

In January, the United Nations refugee agency repeated its call for a review of the refugee status of 500 people detained on Manus and Nauru.