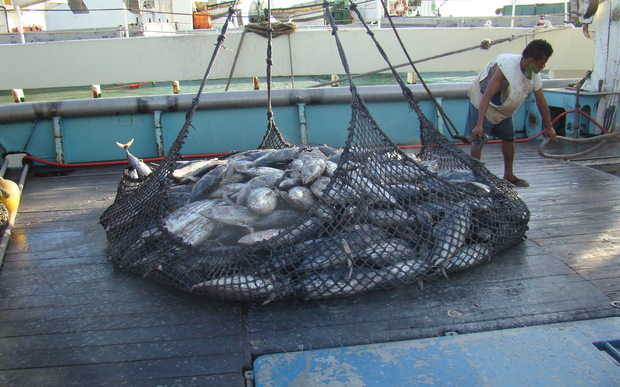 The comments come as the annual meeting of the Western and Central Pacific Fisheries Commission, or Tuna Commission, takes place in Pasay City in the Philippines.

The FFA's director-general, James Movick, said it was too early to tell how much fish could be caught on the high seas and action needed to be taken to ensure the rest of the world held off on overfishing.

"We do have to move towards establishing hard limits that can be followed in all of the fisheries both in-zone and on the high seas, allocating those fairly and then adopting harvest control rules so that in the future when we do run into situations of overfishing or threats, risks to the state of the fishery we are able to make decisions," said James Movick.

Mr Movick's comments echo those of Fiji's fisheries minister Semi Koroilavesau, who told the meeting Fiji's fishery may collapse under the pressure of overfishing.

The Marshalls fisheries department director Glen Joseph said he is happy to see that the purse seine fishing industry has begun taking action to modify fishing gear to reduce by catch of bigeye tuna. Here, a purse seiner off loads its tuna catch in Majuro. Photo: RNZI / Giff Johnson

Also this week, Solomon Islands announced its withdrawal from the Tokelau Arrangement for South Pacific albacore, saying it was too restrictive on fisheries development.

However, Mr Movick said he hadn't received a formal notice of this move and hoped the Solomons would stay in the agreement.

"Unless we can establish some limits to the Southern albacore long line fishery, everyone stands a good chance of going bust. It doesn't matter which deck chair you're sitting on when the Titanic goes down. When the ship goes down, all the chairs go down," James Movick said.