Locals on Papua New Guinea's Manus Island are reported to be looting the refugee detention centre after staff employed by the Australian government to run the facility left early this morning. 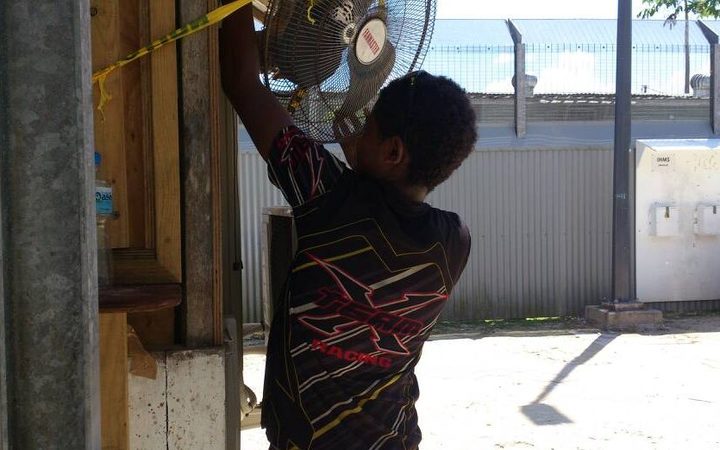 A Manus Islander taking a fan from the detention centre. Photo: supplied

The centre on the Lombrum naval base is closing today, but about 700 refugees are refusing to leave.

Three facilities in the island's main town are being prepared to house the refugees, who fear further attacks by locals opposed to the relocation.

"This morning at 5am everyone walked away, they left us behind, no one is here right now. Locals get inside and stolen whatever they could," he said. 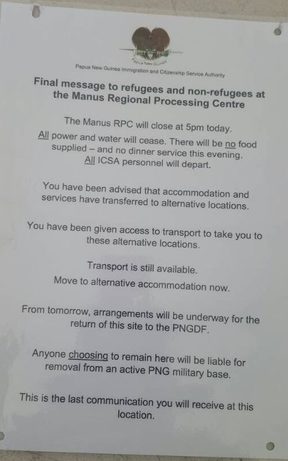 The refugee said items such as chairs, tables, tents and fans were being taken by the locals.

A note posted in the detention centre this morning said the facility would close at 5pm PNG time.

It said arrangements would be made from tomorrow for the return of the site to the PNG Defence Force.

It warned those choosing to remain that they would "be liable for removal from an active PNG military base".

Amnesty International's Kate Schuetze is on Manus Island and said food, power and water services were being withdrawn from the centre.

With a police paramilitary unit on standy to assist with the closure, there are fears the relocation could become violent.

But Kurdish journalist and detainee Behrouz Boochani said the refugees were afraid yet "adamant" they would not leave the centre and would peacefully resist any attempt to move them.

"The refugees locked the main gate. There is not any safety here," he said.

"It's time that I have to say SOS. The refugees are extremely scared. The situation is critical."

Meanwhile, the advocacy group the Refugee Action Coalition said there was a constitutional enforcement hearing in the PNG supreme court this morning to determine whether the PNG and Australian governments had breached the human rights of refugees taken to Manus Island.

It said the determination would open the way for compensation for the human rights breaches and unlawful detention and would seek further orders to remedy on-going breaches.

An application had also been lodged for an urgent Supreme Court hearing seeking injunctions to stop the closure of the centre and the forcible relocation of the refugees to Lorengau town.

The application would seek orders to re-instate all services to the centre, pending a hearing for orders that the PNG government facilitate resettlement in safe third countries. 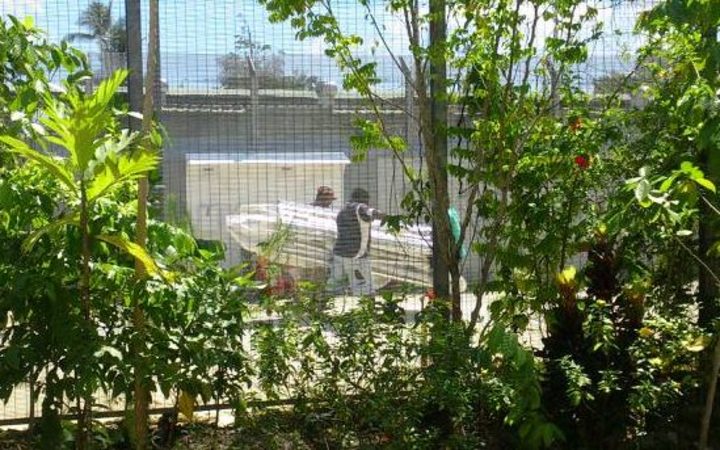 Locals helping themselves to a tent at the Manus Island detention centre 31/10/17. Photo: supplied