A century from Patrick Matautaava has given Vanuatu victory over Germany by four wickets and a semi-final berth in division five of the World Cricket League. 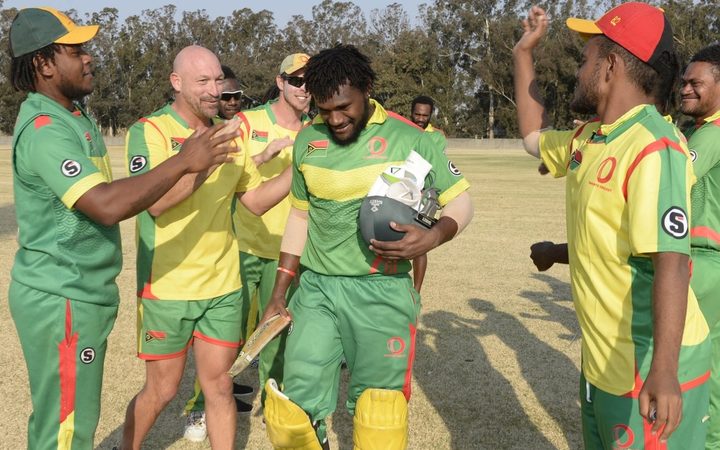 The win in their third and final pool game at the tournament in Benoni, South Africa, followed a two wicket loss to Ghana and a six wicket defeat by Jersey.

Vanuatu restricted Germany to 227 runs after winning the toss and choosing to field, with offspinner Jelany Chilia taking four wickets.

In reply, number three batsman Matautaava scored 139 off 76 balls and finished not out as Vanuatu reached their target in just the 29th over.

Coach Shane Deitz said winning with 20 overs to spare vaulted Vanuatu into second place in pool B on run-rate.

"We knew the equation ... we had 30 overs and in Vanuatu we only play 30 over cricket on a Saturday, so I said to the boys 'it's just like a normal club game back home'," Deitz said.

"Patrick was an absolute star ... he hit them to all parts ... it was an amazing innings and something that I'm sure he'll remember for the rest of his life," he said.

"He opens the bowling for us too, so he's a pretty special cricketer, special talent."

Tomorrow in the semi-finals Vanuatu play the winner of pool A, Italy, who have some handy players, according to Dietz.

"They've got one guy who's played Big Bash in Australia and a few other Aussies and South African's who've played a high standard of cricket," he said.

"It'll be a tough game but the boys are riding high at the moment after today so we've just got to go out and play the Vanuatu way and enjoy ourselves and play flamboyant cricket."