A growing number of detainees is being transferred from Papua New Guinea's Manus Island to Port Moresby with the understanding they will not be returning to the detention centre.

The Australian-run facility is due to close by the end of October but the PNG government is worried it will be left to care for about 800 men still there.

The Kurdish journalist and detainee Behrouz Boochani said about 60 men were transferred to Port Moresby earlier this month and that another 30 would be moved today.

He said the men had been told they were being transferred for medical treatment, but not all of them were sick.

"And I have some information from a reliable source that they will transfer about 60 [more] refugees next week and leave them without any protection," said Mr Boochani.

"They want to continue this political game in PNG cities."

Detainee and refugee from Iran Amir Taghinia said 10 men had refused to go to Port Moresby.

He said they had no health issues but were told they needed to be transferred for medical treatment.

Ben Lomai, a Port Moresby lawyer representing detainees, said he was afraid the men were being dumped in the PNG capital.

"As I understand, once they are here in Port Moresby they won't be able to return back to Manus, and after three weeks they will not be able to get financial assistance from the Australian government anymore," said Mr Lomai.

"So that's put a lot of pressure on them as to how they are going to survive in the city, especially as Port Moresby is very expensive."

Mr Lomai said businesses in Port Moresby had been asked to find work for the men as the PNG government was not in a position to support them.

"PNG is incapable, we still have debts to pay, how are we going to maintain all of these asylum seekers and refugees here?" asked Mr Lomai.

"So we've got a problem on our hands, that's why they're looking for employment opportunities. That is because they are trying to ask them to stay back in the country to work and fend for themselves. But as you know, none of the asylum seekers want to stay in PNG." 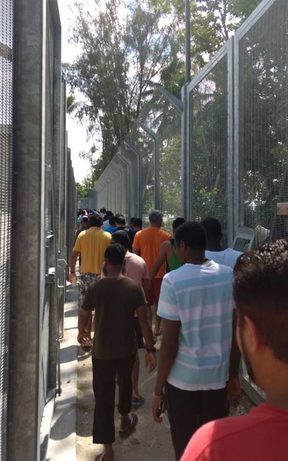 Peaceful protest action in the Manus Island detention centre entered its 28th day yesterday, with refugees demonstrating against the centre's gradual closure and restrictions to power, water and phone services.

The detainees are afraid they will be left in PNG, a fear shared by the government, whose attorney general has called on Australia to halt the centre's demolition.

But while the Australian government refuses to allow about 2000 offshore detainees on Nauru and Manus to be brought back to Australia, Canberra's territorial assembly is calling for their return.

A motion seeking an end to Australia's offshore detention regime passed the ACT Legislative Assembly last week after being introduced by the Greens' Shane Rattenbury.

"There were no votes against the motion when it came before the assembly. I was encouraged by that. I think it reflects the fact that our community is one that is embarrassed by what the Australian government is doing," said Mr Rattenbury.

"It could be suggested that the Australian government is simply seeking to wash its hands of responsibility for these people. I don't think that is appropriate. We cannot make this Papua New Guinea's problem."