The People's National Congress Party of Peter O'Neill has been invited by Papua New Guinea's governor-general to attempt to form government. 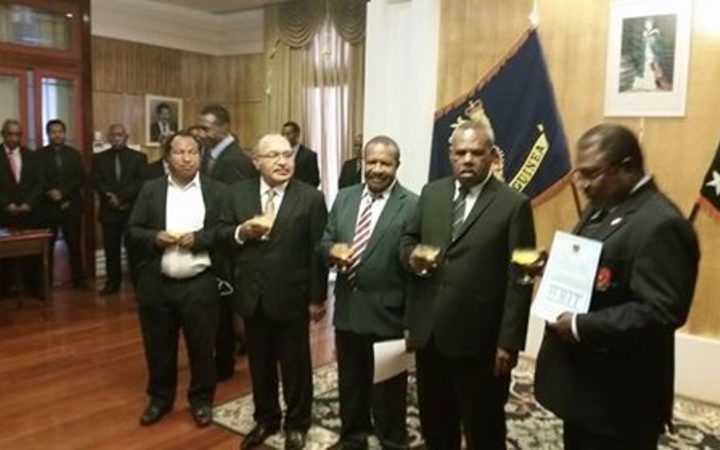 It is a formality extended to the party that emerges from the national election with the most MPs-elect in the 111-seat parliament.

On Friday afternoon, the party had won over a quarter of the 88 seats declared, when PNG's electoral commisioner, Patilias Gamato, returned the writs from the election to the governor-general, Bob Dadae.

However, results had still not been declared in 23 elecorates, leaving an unprecedented gap in the parliamentary make-up at the time the invitation to form government was extended.

Mr O'Neill attended the writs returning ceremony at Government House, alongside William Duma, leader of the United Resources Party, one of the groups the incumbent prime minister had forged an agreement with to form government.

But their claim to a majority to govern will ultimately be tested next Friday when the new parliament meets to elect a prime minister.

Meanwhile, an alliance of parties determined to remove the People's National Congress (PNC) from power says it is confident it will have the support of enough MPs to form a new government next week.

The alliance includes the next two biggest parties behind the PNC, the National Alliance and the Pangu Pati.

Mr Gamato earlier indicated that electorates where declarations of MPs-elect were not made by today's deadline for the return of writs would still be able to submit writs after the hand-over to the governor-general.

It is unclear how many of these remaining MPs-elect to be declared will attend the crucial first sitting of parliament.