Seven months after Cyclone Winston smashed into Fiji, RNZI's Alex Perrottet returns to the islands to find the recovery effort is still going strong, and some villages are taking their future into their own hands.

There's fresh green growth along the western coast of Fiji's main island Viti Levu and the streets are strewn with sugar.

The resilient crop has already recovered and happily overladen trucks drop bits and pieces as they chug along the King's Road.

The Rakiraki sugar mill was smashed by Cyclone Winston and trucks have to drive south to Ba.

Almost seven months ago, children and their parents ran terrified to school halls as the category five cyclone lashed and tore apart small villages with its 325kph winds.

Grandmothers were crushed by concrete blocks.

Children drowned in storm surges, ripped from the protective but futile grasp of their parents.

But now the seas are calm and the air is still. Small corner stores are back to selling the essentials - bread and rice, packaged chips and breakfast crackers, and small brown paper bags of crushed kava.

An old man with a weather-beaten brow smiles with his mouth half full of teeth and passes me my standard order of twisties and oreos.

Branches of ancient trees forever twisted out of shape are hiding their scars with shoots of new green leaves; a baby's cry and a pulsating stereo are all part of the familiar soundscape that says Fiji is okay and moving on.

UNICEF has completed a long programme of football - the round ball kind - to give kids a focus, and it's based in the home of the Fiji Football Federation in Ba. 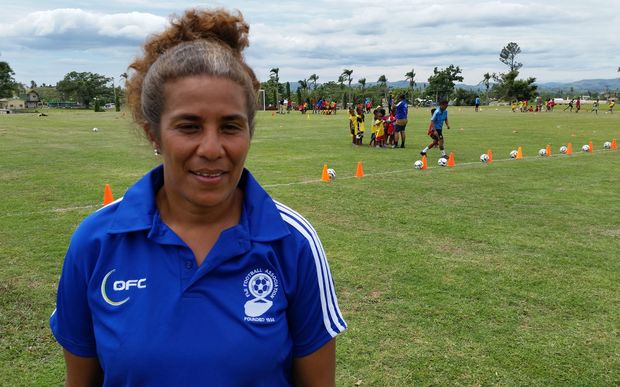 Lavenia Yalovi ran the Just Play programme for kids in Ba with the help of UNICEF. Photo: RNZ / Alex Perrottet

Just Play project manager Lavenia Yalovi says children need plenty of psychological support and this is a way to get some healthy messages across.

Ten-year-olds Jone and Rupeni have had fun but they hesitate when I ask them for their favourite sport, before smiling bashfully and simultaneously saying ''rugby.'' 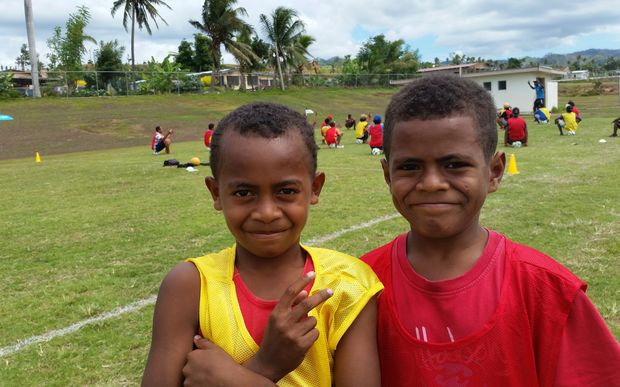 Jone and Rupeni are hoping to make up Fiji's next generation of 7's rugby stars Photo: RNZ / Alex Perrottet

The Olympic gold medal win has buoyed hopes and morale. The world's most hospitable and humble people also share a burning pride in their nation, and the win last month is still a talking point in towns and villages.

It seems that a legitimate answer to any question or problem is 'we won the gold medal didn't we?' 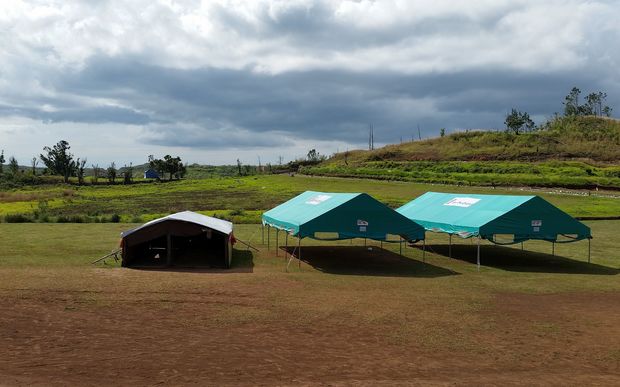 Almost every school is running classes through UNICEF and Save the Children tents. Photo: RNZ / Alex Perrottet

But schools and some villages seem to be stuck in time. Destroyed classrooms, with their crumpled roofs lying in nearby scrub, flank large white UN tents where students learn and take their lunch.

The small blue tents from China look tired and families say they started leaking after a couple of months.

The village of Namuaimada has got itself into gear. In the small house of the chief, or Turaga ni Koro, Usaia Rawaidranu, there's a large whiteboard, listing the 54 families who lost everything and the 33 who lost part of their homes.

The government's Help for Homes initiative spelled out a practical and simple plan - $F7000 to those whose homes disappeared, $3000 for partly damaged homes and $1500 as a bottom tier assistance for others who sustained less damage.

More than 30 people are in court after the government smelt a rat in their applications for funding.

But with 30,000 people homeless, the great majority of people putting their hands up are genuine and needy. 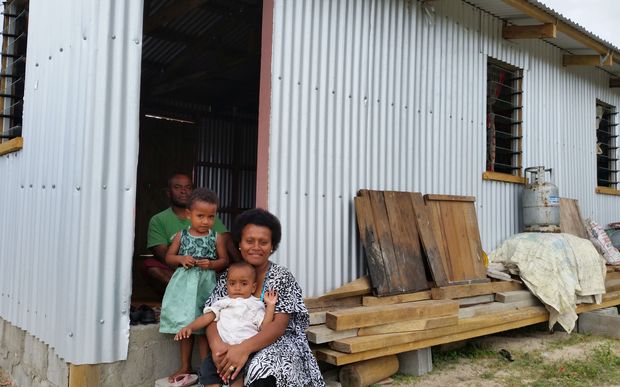 Maraia Waqa is all smiles with a new home in Namuaimada. Photo: RNZ / Alex Perrottet

Maraia Waqa has two children and now, a new home. The smile on her face says everything. It's not just the physical shelter from the elements - a home is a treasure of identity and stability, as well as status. Maraia no longer has to rely on neighbours for help. 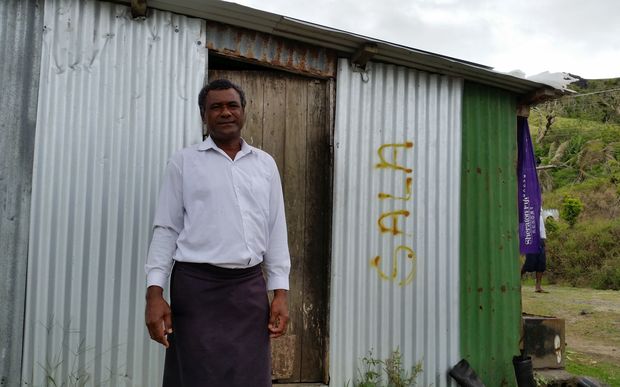 But next door is Sairusi Vunisa, who has a corrugated iron shack that leaks. It managed to stay up, so he got $3000, but he's not a priority and his order for materials hasn't arrived.

Down on the wharf at Suva there's a hustle and bustle of movement as every passenger and cargo ship bound for the islands is loaded full of logs, iron, concrete blocks and tools.

Our ship to Koro Island was due to depart at 6 pm. Forklift drivers worked for hours moving supplies off trucks and the boat pushed off 12 hours late.

The government is coordinating and funding all transport of supplies to outer islands and the locals at Koro are getting desperate.

Nasau village was totalled. Five people died in the winds and storm surge. It is literally in pieces and not much has changed in seven months. 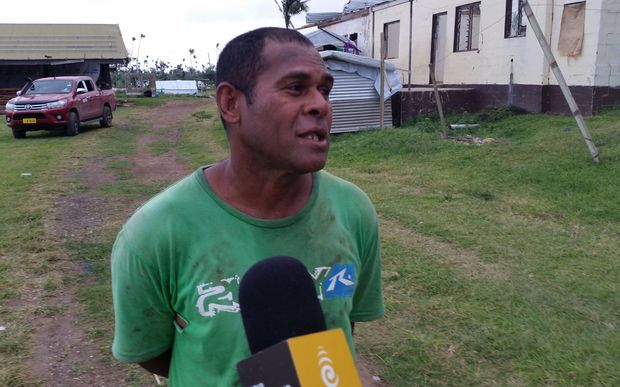 Tired of waiting, chief Kilione Tamani led his men into the forest and cut wood from fallen trees. He's now got enough for 100 houses. He used a mobile sawmill to cut the pieces, which he has lent to nearby villages. It's a remarkable effort that bucks the trend of most villages waiting for directions from the government. 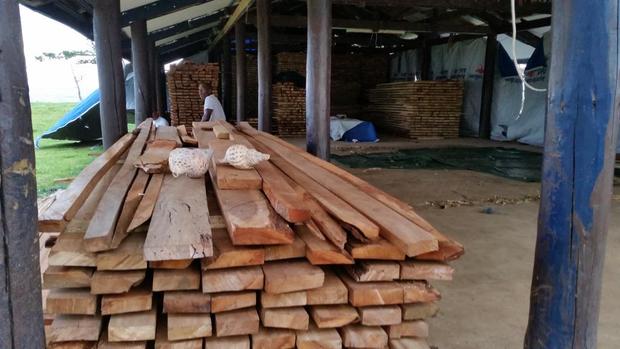 People on Koro Island are too desperate to wait for supplies and have cut wood from the forest themselves. There's enough here for 100 homes. Photo: RNZI/Alex Perrottet

Hardware stores say they are doing their best and also contributing to the effort. Oscar De Mel from RC Manubhai says they are paying for all deliveries on the two main islands. Loads of timber sit in the yard with the names of villages spray painted on them. 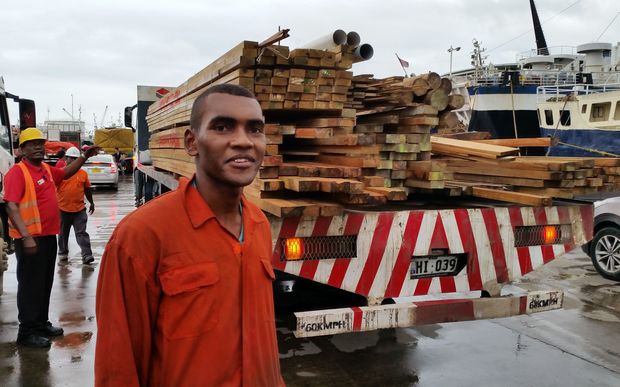 New Zealand suppliers have been sending timber ship by ship but with pressures at home and three month turnarounds, this is a slow process. Timber drying also takes longer in the winter months and has contributed to delays.

But now the materials are pouring in to Koro, and the relief is palpable. Truckloads of supplies must be like precious gold.

Inspired volunteers have been living like the locals, in camping tents, for weeks and months - Oxfam, Red Cross, and the US-based All Hands Volunteers. 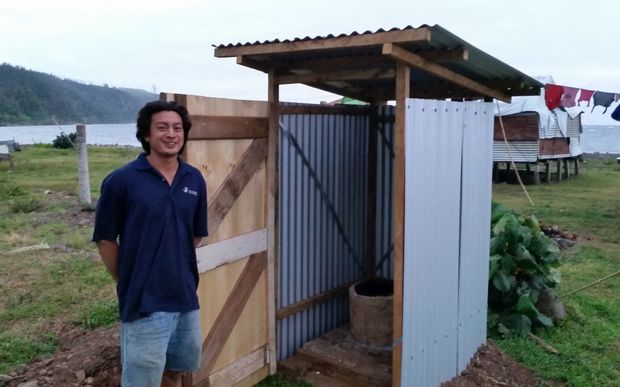 All Hands volunteer Ryan Cuevas with one of the new latrines. Photo: RNZ / Alex Perrottet

And like the locals they've been eating pumpkin dhal and not much else.

The volunteers have been building toilets and teaching sanitation to kids. Ryan Cuevas from All Hands says he has never seen such collaboration between aid groups and now they've almost achieved a ratio of 10 people to one toilet, across the whole island.

With that job done and supplies flowing in, carpenters and helpers are starting to build homes.

But some chiefs are moving coastal homes to higher ground and they have to wait for ground levelling and drainage first. They're worried they won't have any solid structure to go to if another cyclone hits.

In three months the winds will whip again, and these people will be plunged again into vulnerability.

They are three crucial months, and every able-bodied person is building.

Building for their lives.