Thousands of children in Fiji who survived the horrors of Cyclone Winston are still severely affected seven months on. 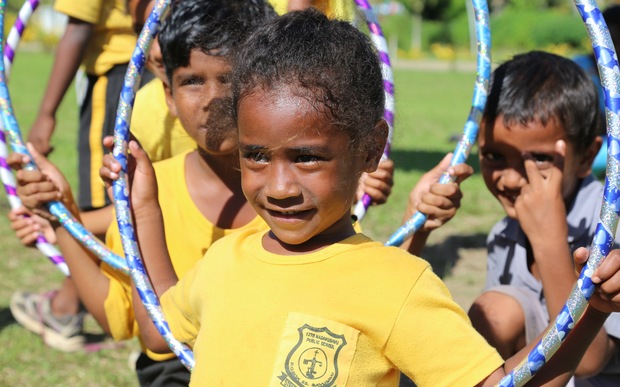 Over 200 children from Nasavusavu Public School took part in the Just Play festival as part of the emergency programme on Savusavu Island earlier this year. Photo: UNICEF Pacific/2016/Hing

This is according to UNICEF and the Oceania Football Confederation who wrapped up six months of child oriented relief work in Fiji over the weekend.

More than 10,000 children were reached by "The Just Play Emergency Programme" across twelve of the most affected areas of Fiji.

UNICEF's Pacific representative Sheldon Yett said it also provided a space for Children to safely share and reflect on the emotional impact that Cyclone Winston had on them.

"Talking to one child she was very very open about the impact of just seeing her family disappear. Her housing and her belongings just disappear out the door. And kids remember that, the psychological impact of huge events like this remain long after the event itself. Falls off the front pages."

While the official programme has ended more than 385 volunteers trained as coaches over last six months will continue to work with children in their communities.

The Just Play Emergency Programme was recently shortlisted for the Beyond Sport Innovation Award, with the winners due to be announced on October 20, this year in London, England.