The biggest retailer in the Northern Marianas, which has a license to sell handguns, has vowed not to sell any out of principle. 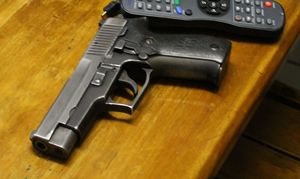 Last week, the US District Court in the territory struck down the local Weapons Control Act, which banned handguns in the commonwealth.

Bo Tenorio Palacios, an official of JC Tenorio Enterprises, said that while he respected the court's decision, he disagreed with extending United States citizens' right to bear weapons.

He said for 30-plus years the CNMI had been a member of the US political family, but it distinguished itself from the rest of the country with gun laws that reflected the will of the people and not that of politicians in Washington.

Mr Palacios said JCT Enterprises was encouraging the territory's legislature and the governor to exercise extreme prejudice in favour of public safety.

The territory's governor and authorities have said the striking down of the law is disappointing and could compromise public safety, while the government has urgently prepared a draft gun law to replace it.

A 57-page draft law to regulate the possession of firearms was put to an emergency session of the House of Representatives last week, which was immediately passed by the Senate.