People in Fiji's southern Lau group are being told to secure their houses as cyclone Winston is on track to pass very close this evening.

Tropical cyclone Winston has been downgraded to a category two as it moves closer to Fiji's southern islands.

But Fiji metservice forecaster Misaeli Funaki said the storm still had damaging winds as high as 155 kilometres an hour at its centre.

He said the cyclone was expected to pass close to the islands of Ono-i-Lau and Kadavu overnight, bringing with it damaging winds, heavy rains, rough seas and squally thunderstorms.

Mr Funaki said people in the cyclone's path should be prepared.

"It's still a very serious threat to the Lau group on the track that it's currently moving on. The last couple of hours or so it's been moving consistently in a northeasterly direction.

"It could be damaging houses which are not tied in properly and could blow some houses and even trees, and uproot trees and damage plantations," he said.

Mr Funaki said cyclone Winston was expected to re-intensify into a category three by the time it reached northern Tonga late on Tuesday. 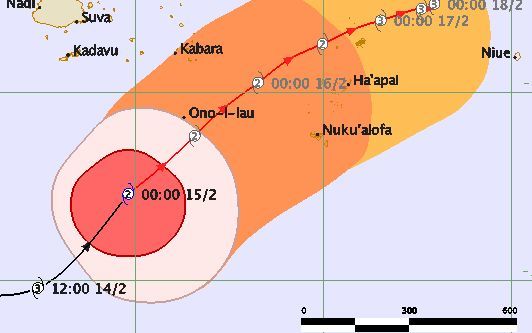