Vanuatu's southern Tafea province has been given the all clear as tropical cyclone Winston moves away from the country, but it now looks like it will curve back up towards Fiji.

The category four cyclone, with winds of close to 165 kilometres an hour at its centre, was moving south-southeast to the west of the islands of Tanna, Futuna, Erromango, and Aneityum on Saturday. 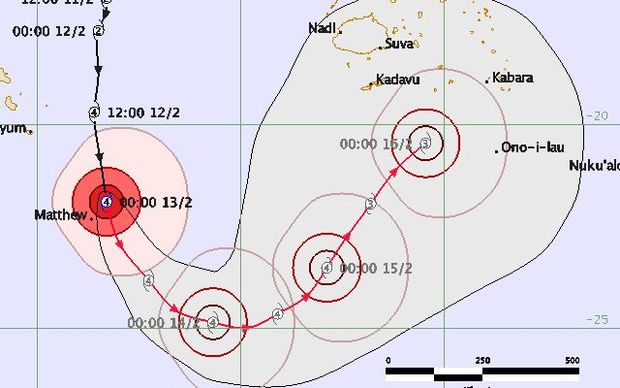 In its final special weather bulletin, the Vanuatu Meteorological Service said winds as strong as 75 kilometres an hour on these islands were likely to weaken.

However, very rough seas and rains heavy enough to cause flooding could still be expected well into Saturday night.

Winston was expected to move south towards New Zealand on Saturday night, before moving to the east and back north towards southern Fiji by Sunday afternoon.

It could still affect Fiji or Tonga late on Monday or Tuesday while still a category three, New Zealand's Metservice said.

Fiji's Meteorological Service on Saturday issued a strong wind warning for areas of Yasawa and the Mamanuca Group, and a flood warning was issued for low lying areas along the Rakiraki river, including Rakiraki town.

Meanwhile, cyclone Tatiana weakened to a category one as it moved south through the Coral Sea, to the west of New Caledonia.