Lobbying in Vanuatu continues to intensify ahead of Thursday's parliament sitting which will see the establishment of a new government with the election of a prime minister and speaker. 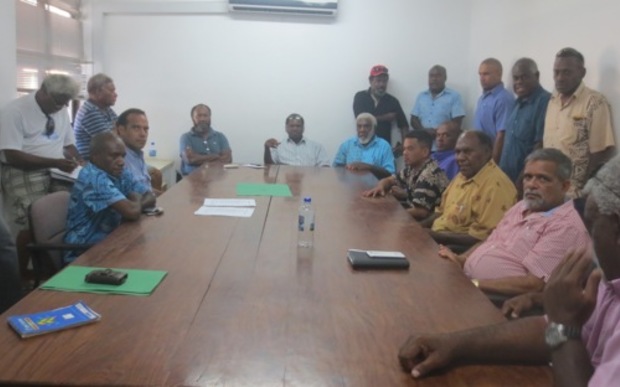 Representatives of Vanuatu's leading political parties including Vanua'aku Pati, the Graon Mo Jastis Pati, the Union for Moderates, the National United Party and the Reunification of Movements for Change. Photo: Supplied

The largest political camp led by members of the former opposition group continues to claim it has the backing of 36 of the 52 MPs.

But the chief administrator of the coalition's Vanuaaku Pati said the other camp, led by the caretaker government, was also claiming it would have the numbers on Thursday.

Robert Avio said if the opposition coalition did take power, one of its first aims would be constitutional change to bring political stability.

"It is really difficult when you have 10 or 11 different political parties coming together to form a government it will be very difficult to satisfy all the parties. So the best thing to do is to if every parties are serious to establish a lasting stability in government then we have to make a lot of sacrifices."

Mr Avio said lobbying was further complicated by the fact that there are only 13 ministerial portfolios and the position of speaker that govermnent can assign to MPs.

In some other Pacific countries there are no constitutional limits on ministerial posts.