Representatives of Vanuatu's leading political parties including Vanua'aku Pati, the Graon Mo Jastis Pati, the Union for Moderates, the National United Party and the Reunification of Movements for Change. Photo: Supplied

A Memorandum of Agreement has been signed by over two thirds of Vanuatu's 52 MPs to commit to forming a new coalition government.

The MOA was signed in Port Vila this afternoon by 11 political groupings comprising 36 MPs elected in Vanuatu's snap election two weeks ago.

The snap election was called following the president Baldwin Lonsdale's move to dissolve parliament late last year amid a political impasse which emerged after the jailing of 14 government MPs for bribery.

The coalition includes all but one of the parties which emerged from the election with more than one MP.

This includes the Vanua'aku Pati, the Graon Mo Jastis Pati, the Union for Moderates, the National United Party, the Reunification of Movements for Change and the Nagriamel.

The People's Progress Party of caretaker prime minister Sato Kilman is not among them.

However, the coalition does include the Green Confederations, a party led by Mr Kilman's former deputy, Moana Carcasses, who was the central figure in the bribery case.

The group includes parties with a lengthy history of crossing the floor of parliament during the frequent motions of no-confidence which characterise Vanuatu politics.

However a statement released by the Graon Mo Jastis Pati leader Ralph Regenvanu says those who signed the MOA are united by a common understanding that there is an urgent and paramount need for political reform to reduce instability in government.

The parties and groupings will now negotiate towards a decision on arrangements between them, including the allocation of the position of Prime Minister, Speaker and Ministerial Portfolios.

The formation of a new government in Vanuatu is expected to formally take shape next week when Parliament sits on 11 February to elect a prime minister. 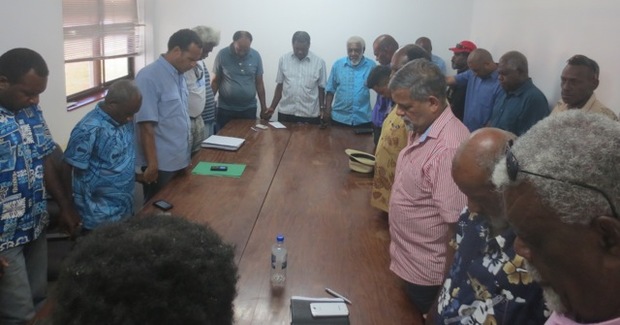 The group comprising over two-thirds of the country's newly-elected MPs say they are united in their bid for political reform. Photo: Supplied