A man in Niue who was arrested and taken into custody when the New Zealand prime minister, John Key, visited in June, is suing police. 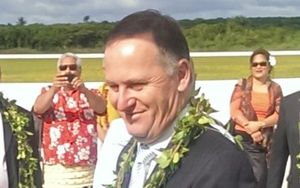 Vilikai Vilikai had been staging a protest about environmental issues by placing signs along the route taken by Mr Key's motorcade during his one-day visit to the island.

He was taken into custody for 10 hours but police have never laid charges although they have claimed he assaulted an officer.

Mr Vilikai wants compensation and an apology from police but Niue's police chief Tony Edwards hopes they can resolve the issue out of court.

"What we have asked is if we could get some time to talk with Mr Vilikai and whoever his defence is to come in and have a discussion on it, so basically what I want to say to him is to give us his grounds as to why he is going forward with suing the police."