Niue police say they are still investigating the arrest of a protestor during the visit of New Zealand Prime Minister John Key last week.

Vilikai Vilikai was placing placards along the road Mr Key was to travel from the airport, protesting over a land rent issue and lack of government action over recycling. 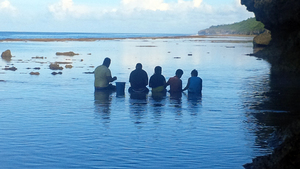 The chief of police, Tony Kose, says the man was not arrested for his protest but for pushing an officer who approached him.

But Mr Vilikai, who remained under arrest for the duration of Mr Key's visit says he was the one that was assaulted by police.

Mr Kose says their investigations will help them decide whether or not to lay charges against the man.

He says people can protest freely but encourages them to let the police know so they are kept in the picture.