The Fall and Rise of Harpsichord 6 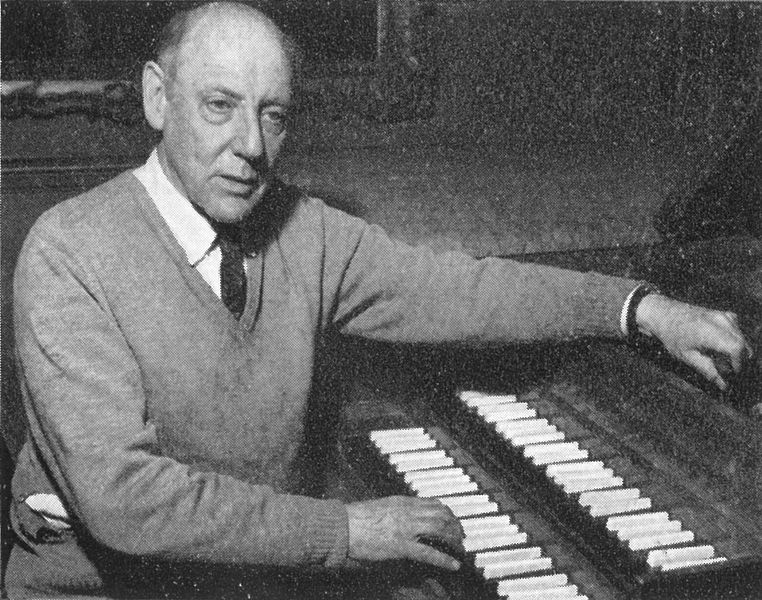 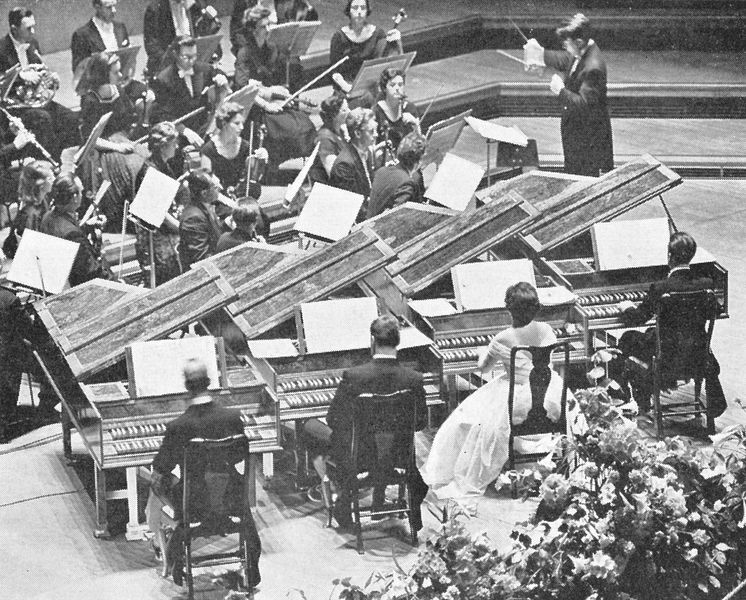 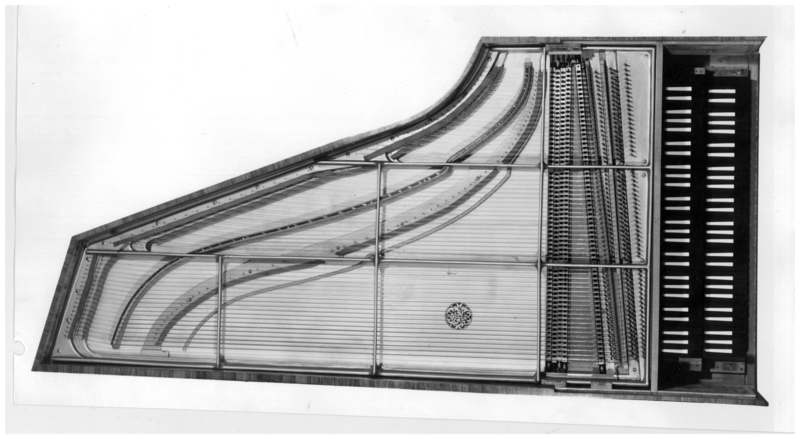 Top view of a Goff harpsichord. This photo was sent by the maker to the NZBS in 1956 to tempt them into purchasing an instrument. Photo: RNZ 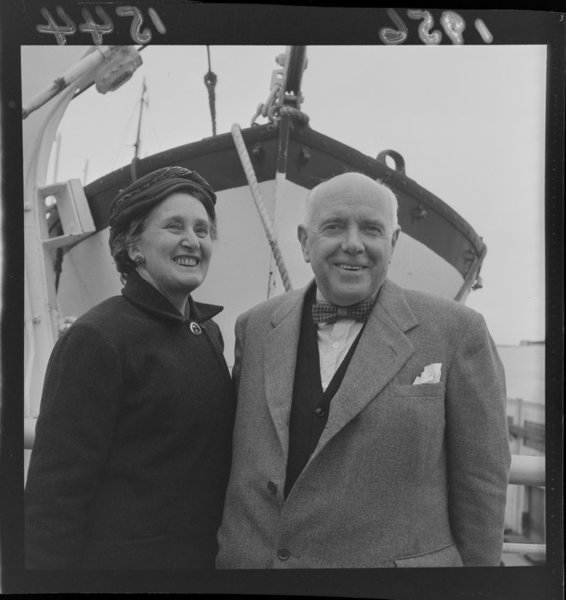 Charles Thornton Lofthouse, who played the Goff harpsichord in its disastrous first public concert in Wellington. Photo: Dr Thornton Lofthouse and his wife on board a boat with lifeboat in background. Negatives of the Evening Post newspaper. Ref: EP/1956/1544-F. Alexander Turnbull Library, Wellington, New Zealand. http://natlib.govt.nz/records/22582660 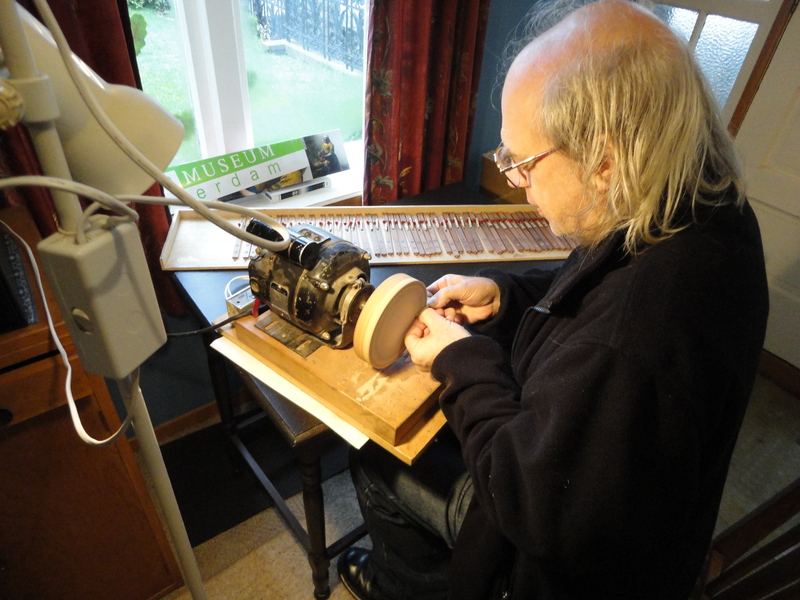 Auckland harpsichord maker and technician Paul Downie working painstakingly on some of the 305 jacks of The Beast. Photo: Donald Nicolson 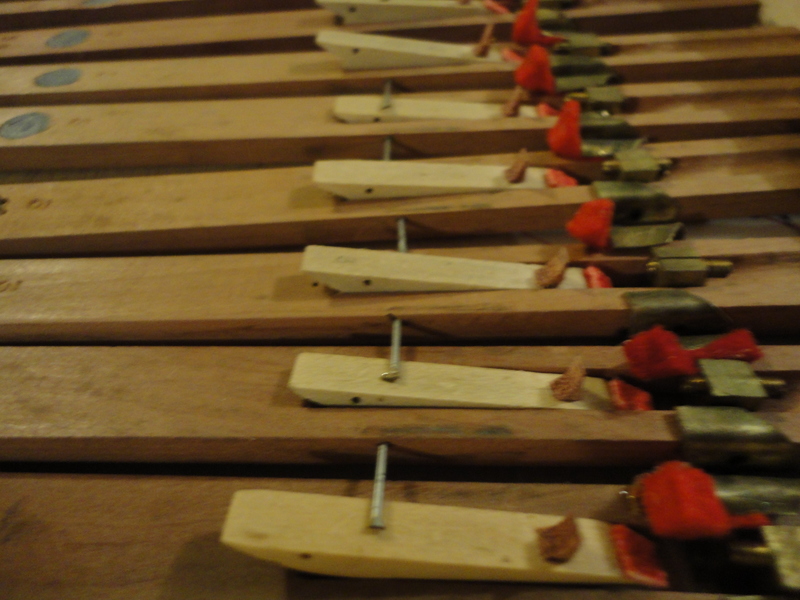 Some of the jacks in their original condition with leather plectra. Photo: Donald Nicolson 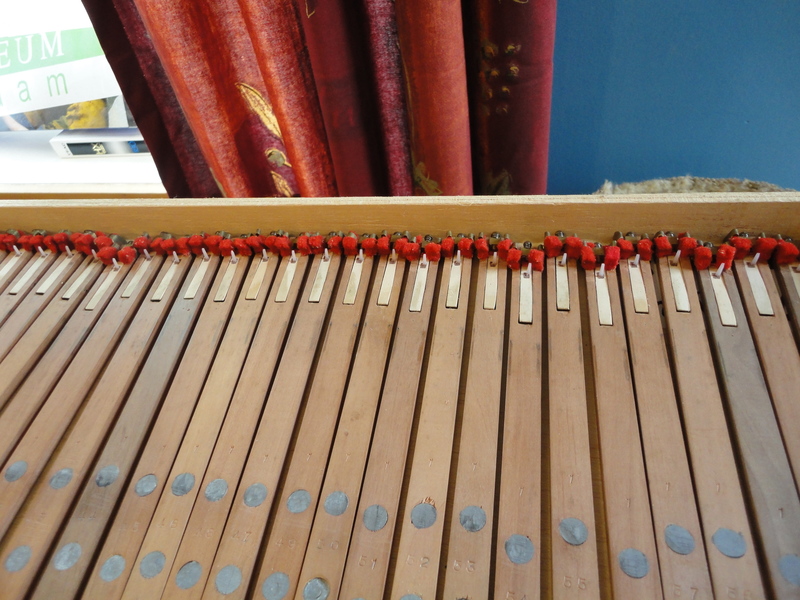 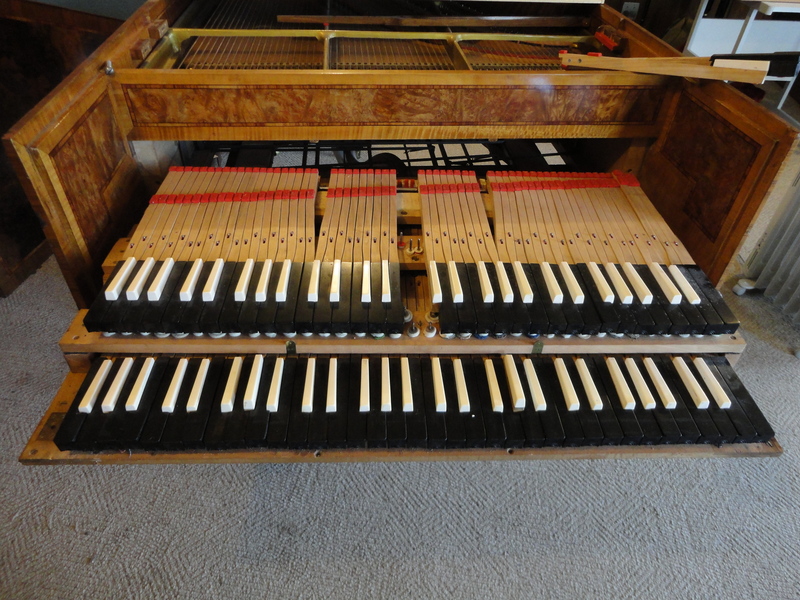 The Beast in the process of refurbishment, jacks removed. Photo: Donald Nicolson 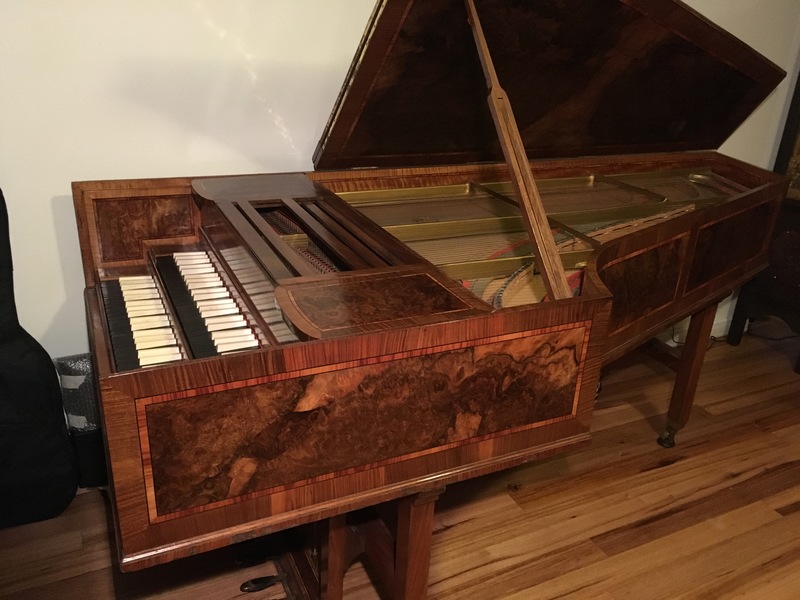 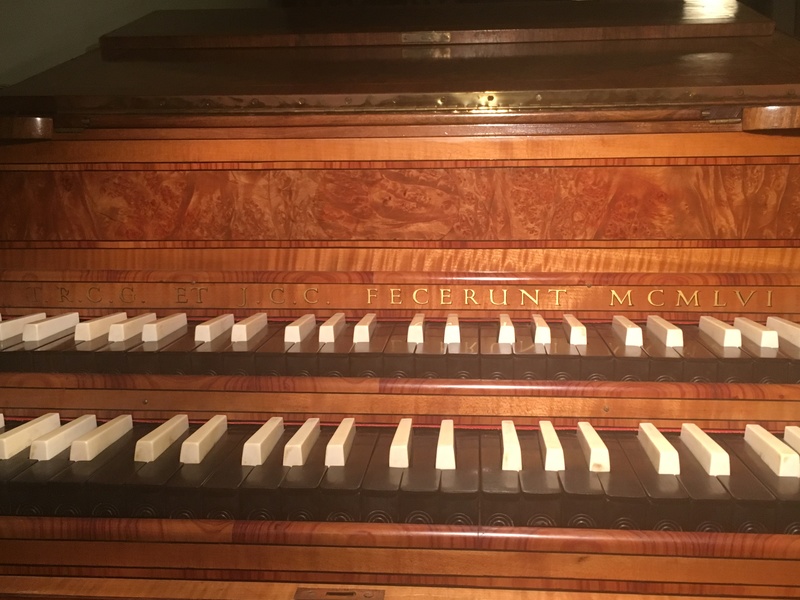 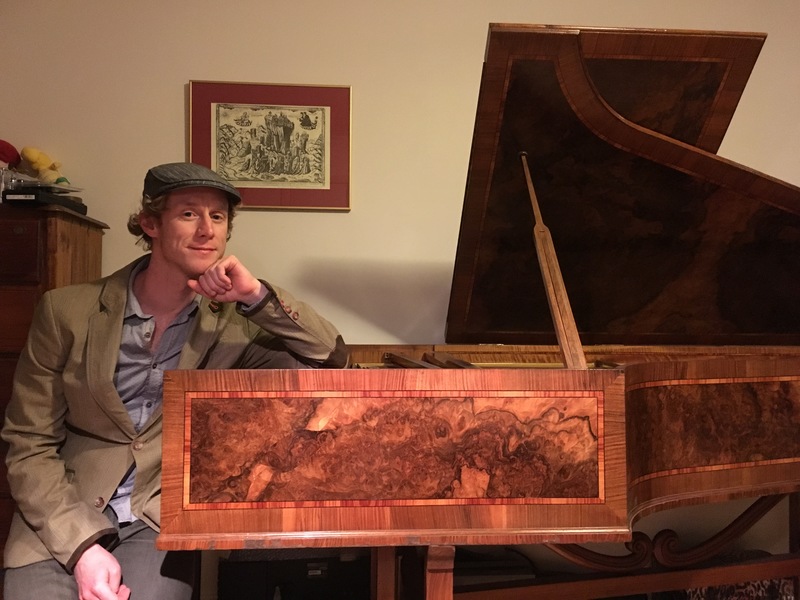 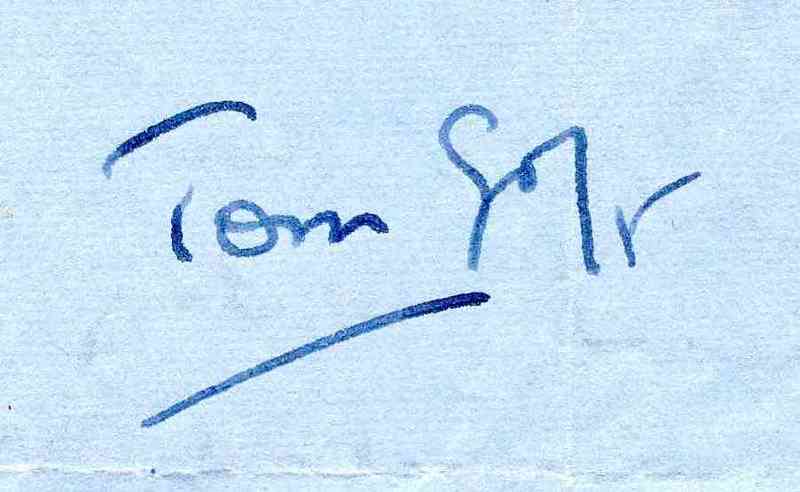 In August 1956, a beautiful new harpsichord arrived in Wellington aboard the RMS Rangitoto. It had been very recently made by Thomas Goff (1898-1975) of London and before being shipped, it was played by George Malcolm at a concert in the Royal Festival Hall. A Goff was considered at the time to be “the Steinway of harpsichords”.

Now, it had been purchased by the New Zealand Broadcasting Service for use by the National Orchestra in baroque repertoire and everybody had high hopes for it. It was introduced to the public within a couple of months at a concert in the Wellington Town Hall of Bach’s 'St Matthew Passion'. The concert was a notorious disaster – no fault of the harpsichord. However, within a few years the instrument fell out of favour and into decline. It sat for decades in the studios of Radio New Zealand, unused and unloved. What went wrong?

James Gardner delves into the colourful and quirky story of Thomas Goff’s Harpsichord No. 6 and of Goff himself. He talks to Peter Averi, retired musician and broadcaster, who was the first person to play the instrument when it was unpacked in Wellington, and to two British harpsichord makers, John Rawson and Peter Owen, who worked with Goff in the 50s and 70s respectively. We also hear the voice of Thomas Goff.

But was there a happy ending? The instrument is now owned by Donald Nicolson and he refers to it affectionately as The Beast. Gardner talks to Nicolson and to instrument technician Paul Downie about the trials and tribulations of trying to get it back into some sort of better-than-reasonable playing condition.

Here's a letter from Thomas Goff to James Robertson, conductor of the NZBS National Orchestra, dated 27 June 1956, telling him that the harpsichord has been packed ready for shipping. 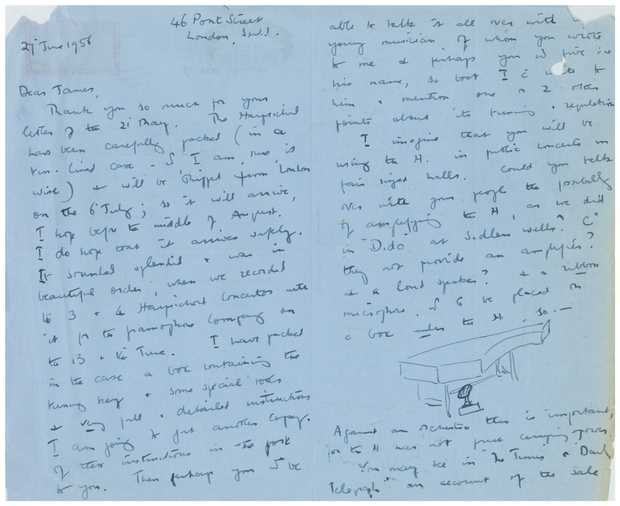 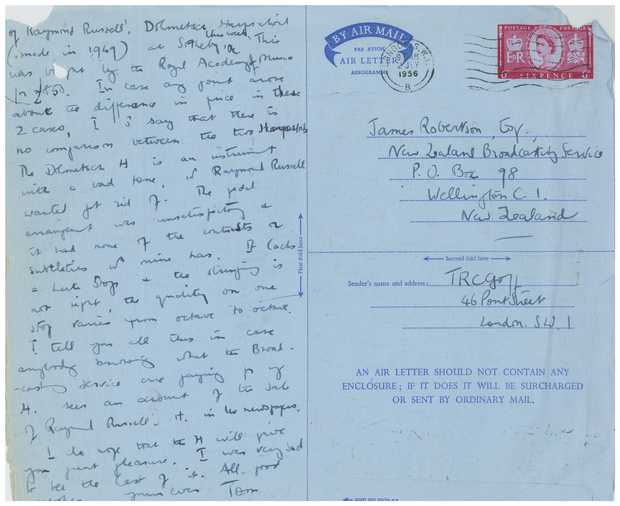 Dear James
Thank you so much for your letter of 21 May. The Harpsichord has been carefully packed (in a tin-lined case – wh[ich], I am sure, is wise) & will be shipped from London on 6 July; so it will arrive, I hope before the middle of August. I do hope that it arrives safely. It sounded splendid & was in beautiful order, when we recorded the 3 & 4 harpsichord concertos with it for the Gramophone Company on 13 & 14 June. I have packed in the case a box containing the tuning key & some special tools & very full, detailed instructions[.] I am going to get another copy of the instructions in the post to you. Then perhaps you will be able to talk it all over with [the?] young musician of whom you write to me* & perhaps you will give me his name, so that I can write to him & mention one or 2 other points about its tuning & regulation.

I imagine that you will be using the H[arpsichord] in public concerts in fair sized halls. Could you talk over with your people the possibility of amplifying the H as we did in “Dido” at Sadlers Wells? C[ould] they not provide an amplifier? & a loud speaker? & a ribbon microphone wh[ich] c[ould] be placed on a box under the harpsichord, so – [drawing]

Against an orchestra this is important, for the H has not great carrying power.

You may see in “The Times” or “Daily Telegraph” an account of the sale of Raymond Russell’s Dolmetsch Harpsichord (made in 1949) at Sotheby this week. This was bought by the Royal Academy of Music for £850. In case any point arose about the difference in price in these two cases**, I s[hall] say that there is no comparison between the two harpsichords. The Dolmetsch H is an instrument with a bad tone wh[ich] Raymond Russell wanted got rid of. The pedal arrangement was unsatisfactory & it had none of the contrasts or subtleties wh[ich] mine has. It lacks a lute stop & the stringing is not right, the quality on one stop varies from octave to octave. I tell you all this in case anybody knowing what the Broadcasting Service are paying for my H sees an account of the sale of Raymond Russell’s H. in the newspaper.

I do hope that the H will give you great pleasure. I was very sad to see the last of it.

All good wishes
Yours ever [?]
Tom

*Oboist Norman Booth, who looked after the harpsichord's maintenance during its first years in NZ.

... to the following people for help in the production of this programme: