A story of poetry, pharmaceuticals, teaching, collecting and above all, music.

Navigation for Ron and Zillah Castle: Their sweet compulsion

This programme looks at siblings Zillah and Ronald Castle, their dedication to reviving performances and interest in 17th and 18th century music and their ever growing collection relating to their own music-making. Both were life passions of the Wellington musicians who were heard performing on 2YA and 2YC for many years.

Zillah and Ronald Castle started the Castle Collection of musical instruments before the Second World War and it was exhibited from their home in Newtown, Wellington until Ronald´s death in 1984.

The Auckland Museum purchased most of the private collection from the estate in 1998, fulfilling the Castles’ wish that their private museum would form the basis of a national collection. The siblings have been described as New Zealand’s "pioneers … in the cause of early music and instruments".

The Castle Collection is the single most important collection of antique, rare and unusual instruments and musical scores in the nation. The collection of over 480 instruments has been described as being unique in the southern hemisphere, and was cited in the new Groves Dictionary of Music and Musicians.

Shelley Wilkinson looks at how their passion for collecting, their numerous radio broadcasts and tireless carting of a large harpsichord into the NZBS studio contributed much to the resurgence of interest in early music in New Zealand.

Gallery: Ron and Zillan and their collection

Presented and produced by Shelley Wilkinson. 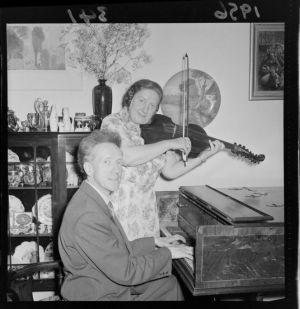