The Salon of the Princesse de Polignac

An evening in the salon of the Princesse de Polignac

At the end of a long day visiting the pavilions of Expo Belle Epoque, Charles Aitken takes a break and tells his son Oscar about the night he was a guest in the salon of the Princesse de Polignac.

La Princesse was born Winnaretta Singer (right). Her father was the American inventor and entrepreneur Isaac Singer who made his fortune developing the sewing machine. Isaac Singer died in 1875 and his wife moved the family from England to Paris.

When Winnaretta came of age she was entitled to her inheritance. Financially independent, she began to collect art and she also brought property in Rue Cortambert.  In 1893 she married the French aristocrat and composer Prince Edmond de Polignac. This was a mariage blanc, an unconsummated marriage, which suited both homosexual parties. It was an unconventional union, but a very happy one because they both shared an extraordinary passion for music.

Winnaretta set about creating an environment where she could present the modern music of the day. She renovated the atelier or her property in Rue Cortambert and installed a magnificent Cavaillé-Coll organ. The room decorated in Louis XVI style also included two grand pianos and could comfortably seat 100 guests, the who’s who of the day.

The role of Commandatrice (someone who commissions new works) occupied her for some 50 years. In this role she presented an influential, mysterious and complicated figure: alternatively forward-thinking and autocratic, flexible and uncompromising, open-handed and penny pinching.

Along with Debussy and Chabrier, Gabriel Fauré was one of the first major composers at Winnaretta’s salon. Her atelier had a vaulted ceiling which was two stories high. The special acoustic of the room inspired many composers to write chamber music especially for it, including Fauré’s Six Songs of Venice.

During this imagined evening in the salon you will hear some of the music that Winnaretta Singer presented there in March 1900, also the year of the Great Paris Exhibition and the summer Olympics.

Appearing as pianist Gabriel Fauré and soprano Jeanne Remacle are Michael Levinas (piano) and Magali Leger (soprano). Fauré is then joined by Frederica von Stade (mezzo-soprano) who plays Anita Kinen.  These are the names of real composers and artists from the period who performed in Winnaretta’s salon.

The role of pianist Alfred Cortot is played by Michel D’Alberto who, interestingly, was a student at the Paris Conservatoire of Vlado Perlemuter, a favourite pupil of Alfred Cortot. 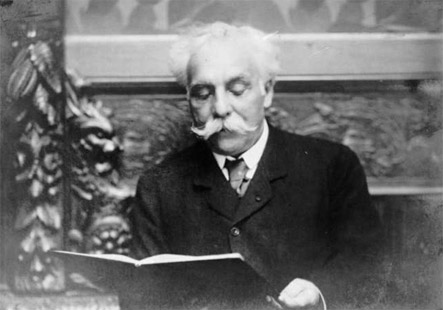 Music used in the Salon