In memory of Claude Debussy (left) and Frederick Delius, both born 150 years ago, and in recognition of a time of phenomenal development, in the arts, sciences and social history we are turning to the era 1880-1914. Both composers would have been at their prime during this period, witnessing the wealthy upper classes of the western world revelling in lives of sophistication and pleasure while other segments of society struggled for equality, fair working conditions and respectful treatment by their contemporaries.

One of the regular events that drew attendance by people from all areas of society in the nineteenth century was the phenomenon of the Great Exposition, beginning at the Crystal Palace in 1851.

For your delight and entertainment, we have invented our own Expo Belle Epoque where you can visit pavilions in which countries are displaying their most distinguished work in various fields. 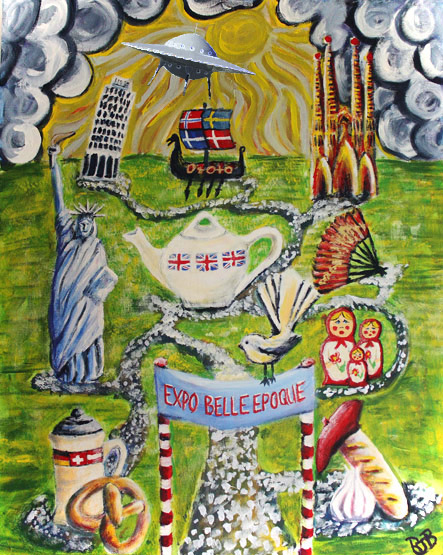 We’ll begin in the country that coined the title of this extravaganza, La France. From there we’ll promenade to the pavilion of the country that admired the French so deeply that high society adopted their language, Tsarist Russia. Looking south our exhibition will take you to the Iberian Peninsula, especially to that fearsomely nationalist province, Catalonia, the artistic canvas of Antoni Gaudi and his fellow modernistas.

From Europe we’ll set sail to The New World, discovering new vistas that inspired the likes of Antonin Dvorak, Victor Herbert and Scott Joplin, and gave birth to the sounds of Ragtime and the musicals of Broadway. Speaking dramatically, we’ll head to the Italian pavilion, where opera verismo takes centre stage. From the company of Verdi and Puccini, with the touring musicians of the time we traverse the globe to reach New Zealand where Alfred Hill was flying the flag and the piano brought music to the parlour.

With its similar latitude and geography the next pavilion exhibits the fjords and mountain ranges of Scandinavia. The British pavilion will be brimming with Victoriana, Edwardiana and news from the Mauve Decade. At the core of Europe, the pavilion of the German-speaking countries displays the various styles of the Vienna Secession movement and the Late Romantics.

Our Global Technology Pavilion displays the most successful inventions of the day. Some were to enjoy longevity, some are now defunct.

The Great Paris Expo of 1889 introduced European composers to the music of the exotic orient and our final pavilion, East Asia, exhibits the sounds of eastern instruments and scales and the inspiration they provided.

We’ll end the Expo by joining one of our promenading companions who has led us through the day, at a cultural salon hosted by the Princesse de Polignac.

These programmes were produced and recorded by Radio New Zealand