"My concept is based around my grandma and my 'Grandma's Knitting Basket', which is also the name of my radio. My inspiration came from my grandma always having a little woven basket with all her materials in it like balls of different coloured wool, knitting needles, scissors, cotton and thread. She knitted everything from scarves, jumpers, doilies, gloves etc.

I liked the idea of soft wool paired with sharp, hard objects such as the scissors and knitting needles.

Radio used to be a family gathering before television, and also where grandma would sit with the family and knit. I think of wool as being a New Zealand product. Wool products are a big part of the New Zealand heritage and still in today's society but just bringing it right back to grandma is choice." 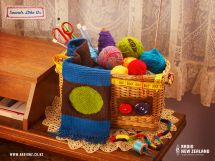