Emma Clarkson:
My radio design is based around the New Zealand honey industry. As I have worked previously for Arataki Honey (Hawkes Bay), I was inspired to design a radio based on a Honey Bee Hive. New Zealand is well known for its honey, especially the popular Manuka honey, which has antibacterial properties and can be used for healing wounds. My design has a Manuka honey pot on its top, and has hive stacks on either side for speakers. The section in the middle of the radio has the typical dials, knobs, cassette and a CD player. I have tried to keep my design as close to original hives as possible, while still allowing it to look like a radio. The bees that float around it, and the landing strips below the hive speakers, hint that it is still a fully working set of hives. The cut out honeycombs on either side (shaped to make them keep the speaker look) prove exactly that. 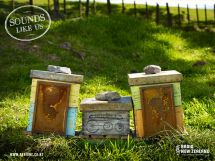