This radio celebrates the significant historical achievement of a hugely influential New Zealander. But it's more than that - Rutherford's work gave New Zealand its place on the global stage. This radio represents scientific innovation, and our small country punching above its weight. It also represents a subject that we Kiwis are very passionate about – nuclear energy. As we debate the issues over its safety and effect on the environment, we also wonder where it may take us in the future. (Judge's comments)

"Radio inspired by great kiwi and nobel prize winner Lord Ernest Rutherford and his innovation in advancing science. Now every kiwi can split their very own (radio) atom." 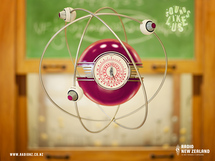