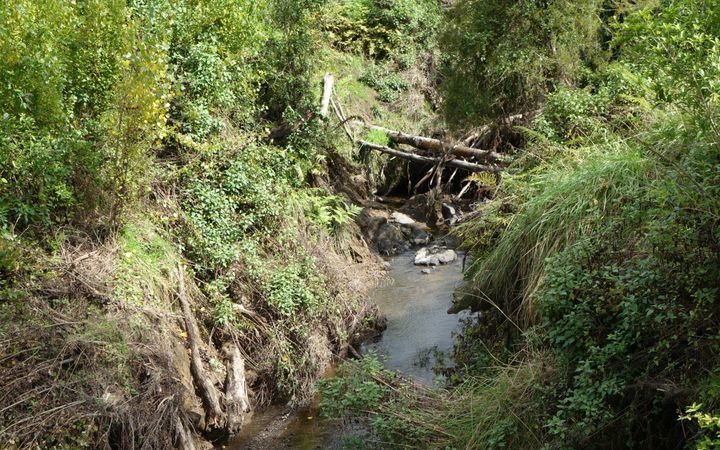 Forestry companies are getting away with serious damage to rivers because most of what they do is out of sight, says a Northland farmer.

Greg Alexander, who farms in the Mangakahia Valley west of Whangarei, says floods have been a fact of life for his family for three generations.

But since the steep surrounding hills were planted in pines under heavily-subsidised schemes in the 1980's, he says the floods have been faster and infinitely more damaging. 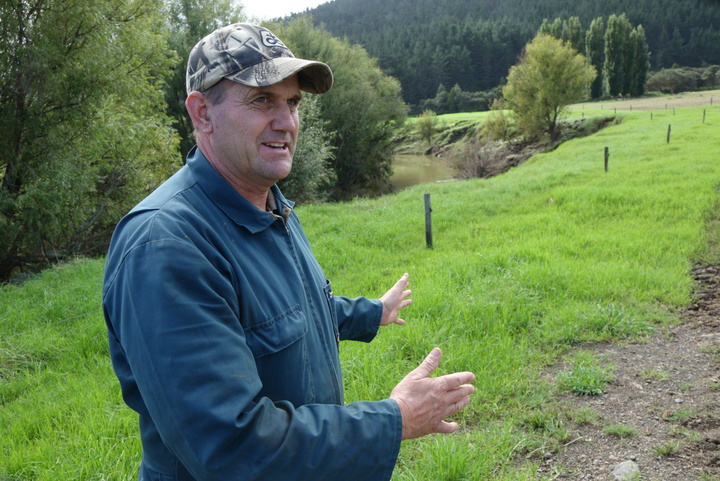 "Every time it floods we get debris coming down the river," he says.

"And when I say debris, we've got whole logs, we've got saw-logs, we've got off-cuts from skid sites - the last four floods I've even got forestry culverts coming down the river from eight kilometres upstream."

After every flood it takes Greg Alexander and a farm worker 120 man-hours and 150 machine-hours to clean up the mess, repair fences and get the farm functioning again.

He says he's been sorely tempted to dump a truckload of forestry rubbish at the doors of the regional council, which monitors the industry, or the offices of the offending forestry company.

But there's a snag.

"You can talk to forestry till you're blue in the face, and their words are, 'Yes, it's radiata debris but we're not sure whose forest it's come from.' They're in total denial. They don't want to take responsibility for anything."

Forestry employs 2500 people in Northland, but these days the big forests planted by the likes of Carter Holt and Shell in the 80s are owned by American investors like Hancock or Chinese companies like Greenheart, which owns Northland Forest Managers and owns much of the Mangakahia estate.

Northland Forest Managers declined an interview, saying the issue was an "emotive" one.

Hancock has not yet responded to RNZ's request for comment.

Down the valley at the Parahaki marae, Sharon Kaipo says if the issue's emotive, there's good reason for it.

She says the companies and the Northland Regional Council know very well the damage being done to rivers - and have done for years. 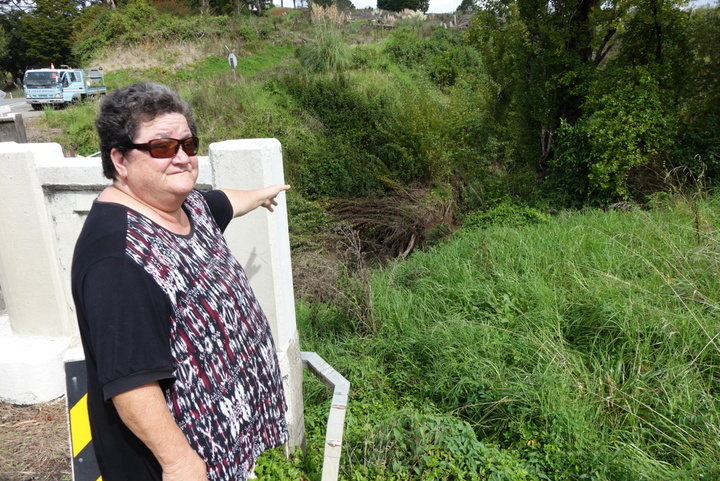 Sharon Kaipo says neither forestry companies nor the Regional Council is removing debris from streams like this one. Photo / Lois Williams Photo: RNZ / Lois Williams

In 2003, Greg Alexander's father Bruce Alexander carried out a survey for Carter Holt of the damage caused to local waterways, by planting on soft soil and steep slopes.

His photographs show pines planted right down to the riverbanks, toppling into the water, taking big chunks of the bank with them, turning the stream brown with silt and creating dams as waste timber built up behind them.

Sharon Kaipo says things have only got worse since Bruce Alexander trudged the catchment to document the damage.

At the marae, she says the stream banks are eroding, creeping ever closer to the marae and the old swimming hole has gone.

"The river levels have dropped; the stuff under the water is gross. It's like thick ... the kids call it 'hupe' (snot). We don't know what it is but it was never there before. My old auntie said in her time they had to swim across there, but by the late 90's it was only up to her ankles."

He protested after Hancock was granted resource consent in 2013 to take gravel from the riverbed to build its roads. 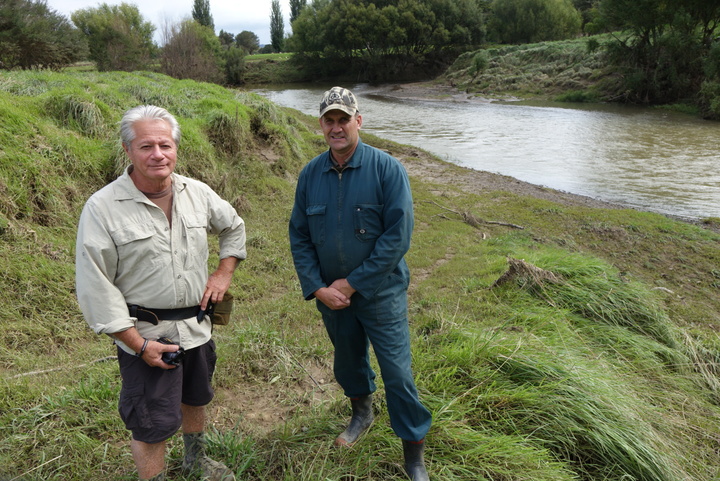 Mr Ruka says the company crushed tonnes of giant boulders in the upper catchment, the habitat of long fin eels and in his view removed nature's handbrake on the river.

"All so a foreign-owned forestry company could get access to its assets for the price of a $600 resource consent - no royalties - nothing," he says.

"Those boulders were millions of years old and this was an outstandingly beautiful part of the river."

Mr Ruka says he believes that removing the giant boulders has allowed the river to flow faster - contributing to the speed of floods and the problems for those downstream. 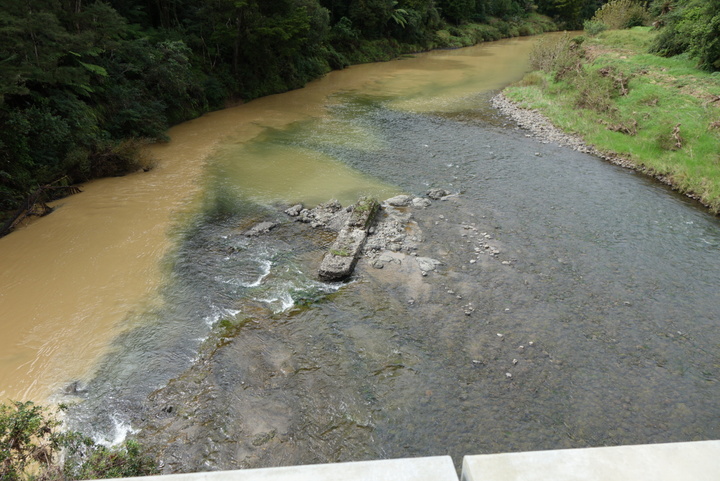 The environmental advocate and author Wade Doak says in the steep Ngunguru catchment, where he lives, pine plantations pose multiple risks to the rivers and not just at harvest time.

And although forestry companies must provide plans to protect the catchment and apply for resource consents, he says those measures - and whatever monitoring is done - are failing to protect rivers and estuaries.

The local pipi beds are still closed after a massive shellfish die-back two summers ago -  after a noticeable build-up of sediment in the Ngunguru estuary.

In an exhaustive study of the Ngunguru catchment in 2012 Wade and Jan Doak documented forestry road building and maintenance on steep hills, windthrow pines, and the failure of silt traps were all contributing to river pollution.

"When they cut down the trees, they haul them up onto a hilltop, and they marshall the logs up there where they're trimmed and put on trucks.

"To make that hill workable they have to cut the top off it to make a plateau, and then like kids playing mud pies, they get all the clay they've excavated and compact it around the edge. And depending on the season, sometimes that's not successful. It just gives way." 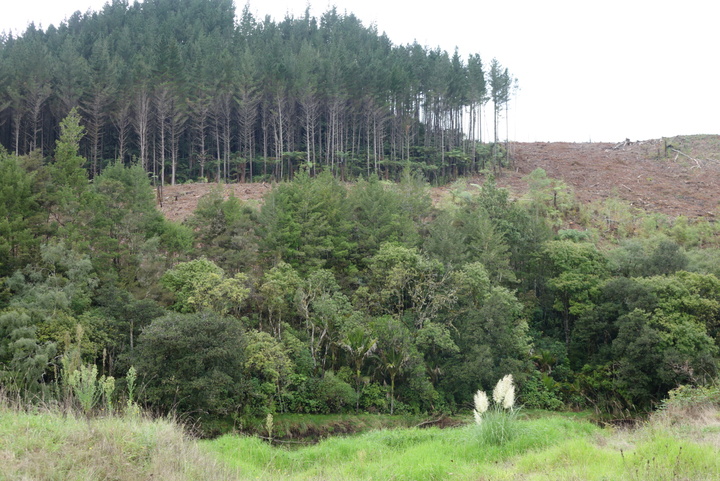 After heavy rain, Wade Doak says, a giant plume of brown sediment billows out to sea, covering the Ngunguru estuary in layers of silt and smothering small reefs along the shore.

And even best forestry practice is prone to fail in the face of climate change and increasingly intense monsoon-style downpours, he says.

Even the body representing forestry owners says the industry is making a mess in some places.

In some cases, those pine plantations should be taken out of commercial forestry and re-planted with natives, he said.

The association had been working with the government on new environmental standards to identify the problem areas.

However, asking owners of forestry land to retire it from commercial production could come at a cost, Mr Rhodes said.

Northland Regional Council says it employs two staff to monitor forestry activities in Northland and they visit each plantation at least once a year.

But its critics say that regime has notably failed to protect the region's waterways.

They believe the steep hills should be retired from pine production and replanted in manuka and other native species that used to cover them.