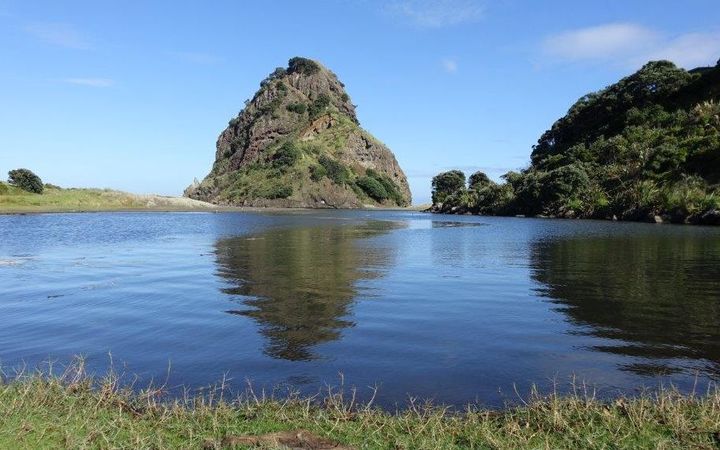 Piha is famous for its rugged black-sand beaches, powerful surf and iconic Lion Rock, but locals say Auckland Council needs to do more to fix the deteriorating quality of the local lagoon.

But now the 70-year-old rarely lets his grandchildren touch the water. 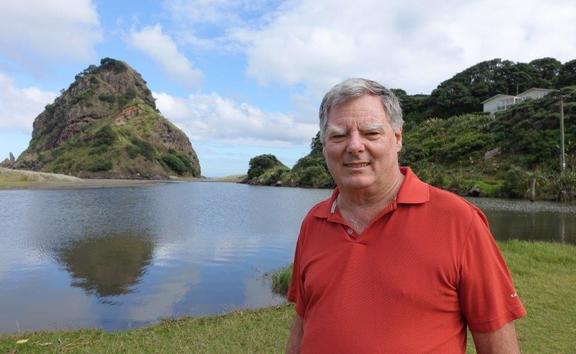 "There's pollution coming from many sources, including waterfowl and so on, but the main problem appears to be outfall that originates from septic tanks," he says.

Weekly testing of Piha Lagoon between November and March found most weeks E coli levels in the water were more than 500 parts per 100 millilitres. Some weeks it reached as high as 2800 parts per 100mls.

Water with fewer than 260 parts per 100mls is considered safe to swim in. This summer, Auckland Council issued a long-term health warning for Piha Lagoon because it consistently breached safety standards.

Standing on the edge of the lagoon, where a large sign warns people not to swim in it, Mr Cowan - who is the president of the Piha Ratepayers and Residents Association - shakes his head.

"The lagoon's quality started to noticeably decline in the mid 1980s. Locals starting asking [Auckland] Council to do something about it. Since then we've had regular reports from consultants every couple of years, for the last 25 years. But they don't want to do anything," he says.

Piha, the birthplace of surfing in New Zealand, is famous for its rugged black-sand beaches, powerful surf and the iconic Lion Rock.

Nestled on the western edge of the Waitakere Ranges and just 39km from central Auckland, come the weekend it's a popular destination for city folk, families and international backpackers alike, who flock to the town to enjoy its bush walks, lounge in cafes or try their luck at catching a wave.

Now home to about 900 residents, run-down baches and million-dollar designer homes poke out of the bush-covered valley that surrounds the town. The hill slopes down the beachfront, where at the bottom sits the lagoon as its stream snakes down past Lion Rock and out to sea. 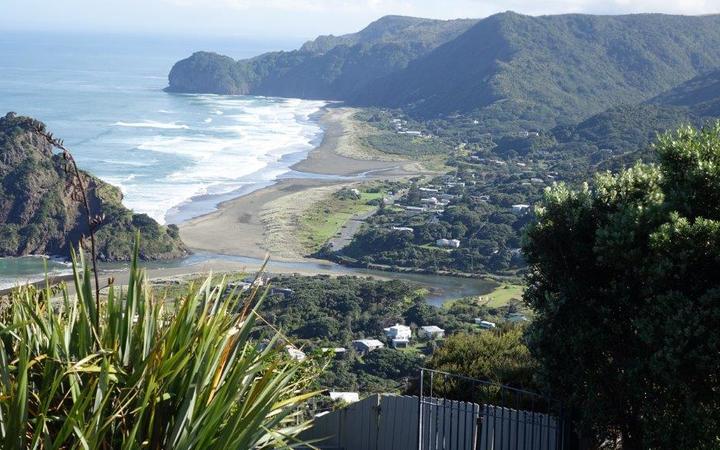 The lagoon used to offer the perfect place for those keen to escape the pounding surf, but it has become a victim of its own geography and bad planning.

With no public sewerage system in town, private homes rely on septic tanks to filter their waste. But the council has estimated between 10 and 25 percent of septic tanks in the town might not be working properly.

This essentially means human waste trickles down the hillside, ending up in the lagoon.

It's a similar story for a smaller lagoon on Piha's northern beach as well as the lagoons in the neighbouring west coast beaches of Karekare and Bethells Beach. 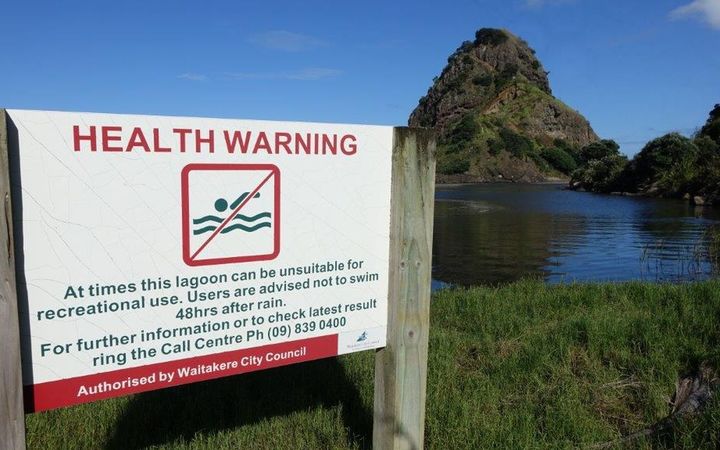 Tests by Auckland Council of all these lagoons show they are contaminated by bird, dog and cow faeces, but the biggest culprit is human waste.

Compounding the problem is a build-up of sand along the west coast over the past 60 years. This naturally occurring phenomenon has made it increasingly hard for the tides to reach the lagoons and flush out the dirty water.

The Piha Ratepayers and Residents Association wants the council to periodically remove the build-up from the mouth of its lagoon, to allow this to happen.

Retired microbiologist Dave Bryant says the association's own testing of the water before and after king tides or heavy rainfall, which naturally flush the lagoon, shows it works. 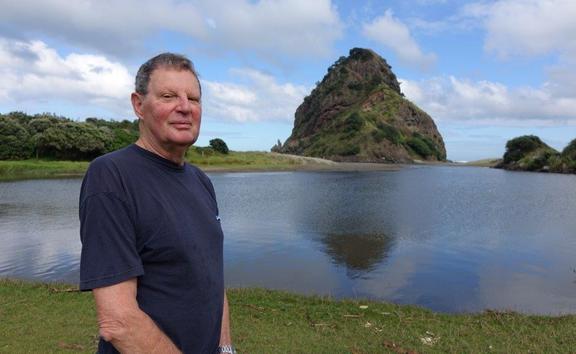 "We certainly found that after the mouth of the lagoon opened, we actually got significant tidal flushing and the [E coli] counts dropped significantly."

Sometimes this has not happened for years at a time, including between 2013 and 2015, when the lagoon was stagnant.

Environmental consultancy Tonkin and Taylor has recommended removing some of the sand from the mouth of the lagoon when it gets too stagnant, in a report commissioned by Auckland Council in 2015.

But it will be too expensive, too invasive, require resource consent and is not a permanent effective solution, Auckland Council senior healthy waters specialist Sarah Irwin says.

"We see the flushing as a bit of an ambulance at the bottom of the cliff. We'd rather be addressing the issues at the source," she says.

The council is considering creating new bylaws on septic tank maintenance that will force owners to prove they are functioning properly.

It could be modelled on similar bylaws already in force on Waiheke Island, Ms Irwin says.

"That requires people to provide maintenance records and that seems to be working, so that is the kind of thing that we might be looking at."

The council is trying to put in place a more targeted, proactive enforcement, she says.

"It's a very complex issue. It's just a matter of time...there are so many tanks out there." 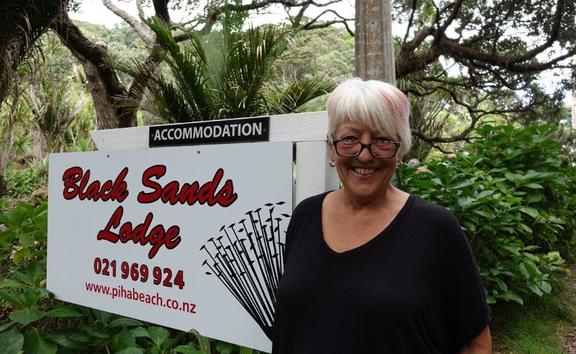 Piha resident Bobbie Carroll says she is sick of waiting for the council to act.

Sitting on her deck just metres from the beach and surrounded by native bush reverberating with the song of tui, the Black Sands Lodge owner gives a frustrated sigh.

"I'm just a little tired of all the huis. There's been huis for decades. We need to fix the problem at its source and the council needs to start taking some serious action."

The best solution is to install separate sewerage treatment systems in Piha North, Piha town and Piha Beach, she says.

Penalising those with faulty septic tanks is also needed, she says.

"You take your car for a warrant of fitness and [if] it fails you're not allowed to drive it. If your septic tank is inspected and it's not working properly, how about we take similar action? A car that fails a warrant is a danger on the road. Septic tanks that are not working are a huge problem to our lagoons here."

Piha residents already pay a special levy to the council for their septic tanks to be pumped out and checked every three years. Residents with newer high-tech models or only greywater systems can opt out of the levy.

Last year the Waitakere Local Board also offered $50,000 in subsidies to homeowners in the western lagoon catchment areas wanting to upgrade their tanks. Eleven people applied for the money, with 10 residents each getting $5000. Five were from Piha.

Board chairperson Greg Presland says it is likely this will be offered again this year, but the council should use the powers it already has under the Resource Management Act to tackle residents with faulty septic tanks.

Auckland Council has just started offering residents in the catchment areas of Piha, Bethells and Karekare, as well as Waihere's Little Oneroa, loans of up to $35,000 to upgrade their faulty septic tanks, which can be repaid through their rate bills over a 15-year period.

No one has taken up the offer so far but the council plans to start marketing the option to residents in these areas this month, Ms Irwin says.

What about a whole new system?

Although not all Piha residents saw eye-to-eye on the issue of opening the lagoon mouth, many told RNZ they believed the only way to fix the problem was to install a proper sewerage treatment system in the town.

The council had not considered this, but if it were to, it would have to do so in consultation with Watercare and it would be something ratepayers themselves would have to pay for, it said. 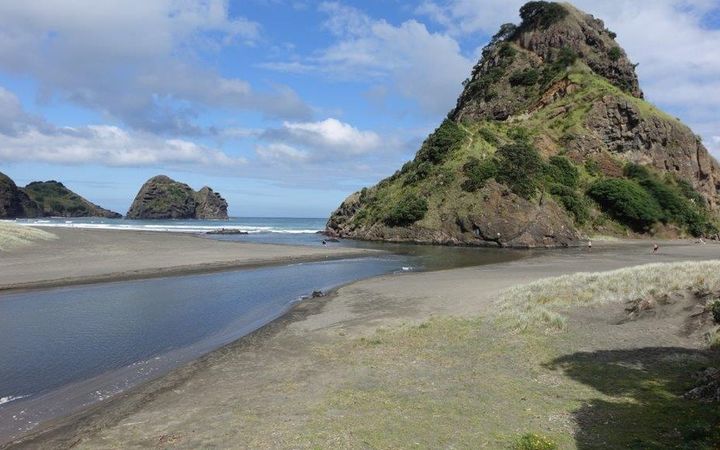