OCD in a pandemic

A mental health advocate says the Covid-19 crisis has increased community anxiety, but there is no evidence of it triggering compulsive obsessive disorders. 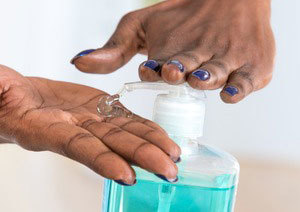 OCD neurotically compels people to repeat or exaggerate certain behaviours because of obsessive thoughts, resulting in things like hoarding. Types of ODC include checking, contamination and intrusive thoughts.

Many sufferers have problems with excessive and compulsive hand sanitising and washing, used as a means of seeing off perceived dangers of physical contamination and germs from others.

Allan said it was unclear whether the current focus on hand sanitising was triggering those with OCD or had created an environment where OCD could develop in those with high-anxiety levels.

“We can’t say absolutely that there’s been a rise in cases, but what we do know however is there’s an increase in community anxiety,” Allan said.

“There’s a lot of self-talk we need to have now. We tolerated uncertainty through our past in many parts of our lives. What we can control is our actions in this moment and that’s where the guidelines of social distancing come in. That’s probably the most important thing for us to be keeping on top of right now.

“But actually, we have almost no control over the results of those actions, so accepting that we have a lack of control can be empowering of itself. We just need to keep telling ourselves that we can handle being anxious, that it’s OK to feel anxious, that it’s normal.”

According to health statistics 80 percent of New Zealanders know someone who suffers from mental distress.

In cases where that has developed into OCD, the one common theme all sufferers have is obsessive thoughts, which may or may not lead to compulsive behaviours.

“The thing about OCD that is the distressing part is the obsessive thinking behind those actions, that lead to compulsions and those compulsions may be very different among anyone experiencing these.”

She said the Covid-19 pandemic could offer an opportunity to rebalance those obsessive thoughts and turn a weakness into a strength through forming rational, structured routines, especially for those with issues with obsessive hand-washing.

“For many people with obsessive thoughts it becomes distressing because of the rituals that come along with it, but it you think of that as being a strength – being able to ritualise your day in a way that’s really healthy. The guidelines say wash my hands for 20 seconds, so I’m only going to wash my hands for 20 seconds. And then set up a routine for the day and make that the obsession.

“Change the obsessive nature into a strength and be kind and gentle to yourself.”

OCD sufferer Sam, who is in his twenties, developed the disorder gradually from the age of 13 around the time of the SARS virus outbreak in 2009.

During a trip to Christchurch museum his father had warned him to sanitise his hands and phone.

“From about there until 2010 I had a very slow progression of symptoms increase. I was petrified that I was going to get contaminated by people’s saliva,” he said.

“It got to the point where I was at school and I’d be running to the bathroom to wash my hands and that kind of thing. In 2011 that’s when it really turned into a serious issue that was impacting my life.”

He said the current situation presented unique challenges for him, as it created the type of uncertainty OCD thrived off.

“Covid-19 is not something I’m worried about contracting. What is really concerning me is stories about people wiping off the shelves hand sanitisers. Everything that we’ve built our lives around at the moment that we’ve just lost. And having not to touch things that I would have deemed being contaminated, so I can ration what I’ve got.

“That’s not a good way to treat my OCD. It’s what we call ‘flooding’, when something like this happens, when you can no longer action your compulsion. It’s when you just stop. There is evidence that’s it’s a highly-effective way to treat OCD, but it’s also an incredibly distressing way to do it."

Sam said he would rather deal with his compulsion in a measured way, consistently confronting it in daily life outside his bubble, and feared the sense of splendid isolation social restrictions afforded him would make it harder in the long-term.

“It’s really dangerous for me because when I’m in isolation and I’m in my safe space, my nice clean house where nothing goes wrong. I’m not being exposed to the same level as I was being exposed pre-Covid-19, so now, instead of going out and facing my exposure head on, I’m not going to recover from OCD in a condition like this. I need to be exposed to difficult things to move on from them.”

Genevieve Mora, who co-founded Voices of Hope, a website that aims to break the stigma of mental health issues, said it was normal to feel anxiety during the present period and that it was important ODC sufferers just accepted that.

Mora overcame OCD, which she had developed as a fearful child obsessed with staying safe ever since watching a TV documentary about a murder.

“The more you engage in these behaviours the more ingrained these become,” she said.

She developed neurotic thoughts that she knew were irrational, but the feeling these were necessary compelled her to act them out.

“I had to do everything an even number of times. I’d read a magazine page four times, I’d have to check in on my parents four times. I had migranes, so I’d engage in these behaviours to stop myself getting migranes, or to protect my family from not getting killed.”

The fact that ODC sufferers carry out these compulsive rituals in private makes the disorder hard for people to detect.

“You don’t want anymore people to see you in this way, so for me I’d spend a lot of time in the bathroom, so I’d make sure I got all of my rituals and compulsions done.

“I came out of the bathroom one day completely exhausted and said to mum ‘I think I have OCD’ and I don’t think she really understood what it was.”

It morphed into an eating disorder and took the disorder to the next level.

“By that point I was very out of control and in situations like this where we have no control over them just adds to that anxiety.”

Mora fears these types of escalations could occur with people while they are indoors and away from the public view, trapped in a climate of fear.

“I think it’s somewhat normal for people to be feeling anxious at this time, but with obsessive compulsive disorder sufferers it’s almost gone to a new level, out of control,” she said.

“Also, for those who struggle with ‘contamination’ OCD, there’s the fear of dying. There are so many different types of OCD out there, and thoughts and fear become even more vivid and rampant at this time.”

“I guess my fear for people with OCD right now is they are really struggling and I think it’s important to remember it’s OK to be struggling at this point. There is a lot going on externally but just stay on course your treatment.”

Please send in your questions and comments via RNZ's Voxpop App!