How are the male kākāpō measuring up in the popularity stakes with the females? Young male Tākitimu is super-stud of the year … so far.

And the Kākāpō Recovery Team from the Department of Conservation are going to try a radical approach to making as many kākāpō babies as possible – they’ll hand-rear the first batch of chicks and hope the females nest again. 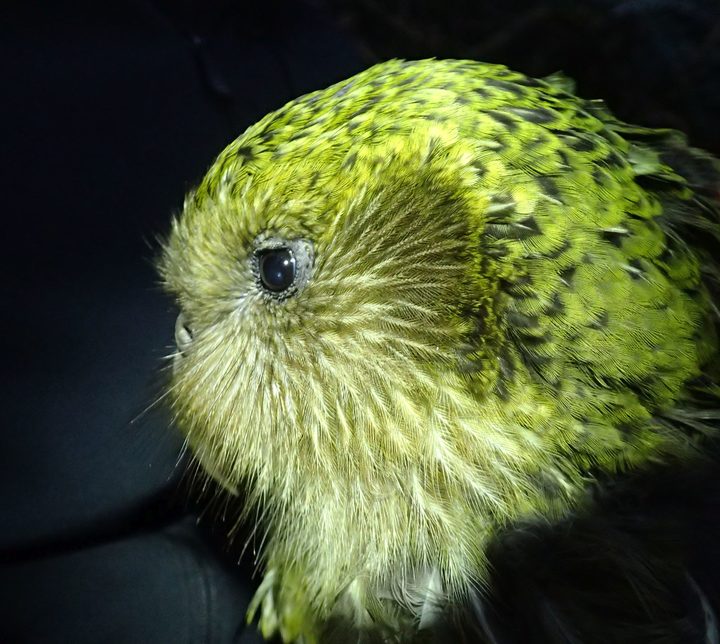 Boss is one of the original Stewart Island kākāpō, and a successful breeder with a proven track record. Photo: Kākāpō Recovery / DOC

Being courageous and inventive has helped the Kākāpō Recovery Team increase the kākāpō population from 51 birds to 147 birds in just over 20 years, and they are out to make the most of this bumper breeding season.

Manager Deidre Vercoe says they plan to get every female to renest. She says they do this by removing eggs from the nest, which usually prompts the female to mate and lay again.

Deidre says they can do this because it is such an early breeding season, and the hope is that it will boost the number of chicks produced.

Renesting was tried with 12 females in the 2016 breeding season and eight females successfully nested a second time.

To date, 19 out of 21 females on Anchor Island have nested, and the island rangers have found 16 nests. Unfortunately around half of all kākāpō eggs are infertile, and that is the case so far, out of more than 30 eggs already laid.

The breeding season on Whenua Hou / Codfish Island is several weeks behind Anchor Island. Twenty one out of 29 females have mated, and the island rangers have found 4 nests so far.

Deidre says that the first female to nest, Pearl, has already mated again, after her nest was abandoned following an altercation with a petrel.

Kakapo scientist Andrew Digby says that while all the male kākāpō are booming well, only a few of them will successfully attract a female to mate with. But a small number of birds  - the super-studs -will be very successful.

So far this breeding season, success seems to be running in the family. Sixteen-year-old Tākitimu, on Anchor Island, is the most successful male to date, having mated 11 times with six different females.

His father Basil is also high in the popularity stakes: six matings with three different females.

Pearl hatched in 2002. Her mum is Alice and dad is Waynebo. She started breeding when she was nearly 7 years old. Her first two chicks from the 2009 breeding season were Jemma and Juanma. They have a place in kākāpō history as they were fathered through artificial insemination.

Pearl is a good mother. In 2016 she produced three more chicks – Attenborough, Punga and Faulkner.

Boss is an original Stewart Island bird, found in 1989. Until 2011 he had fathered only two chicks, but he had a great year in 2016, fathering 5 chicks. This breeding season is first time he and Pearl have mated. To date he is one of the most successful males on Whenua Hou, and has mated five times with three different females.